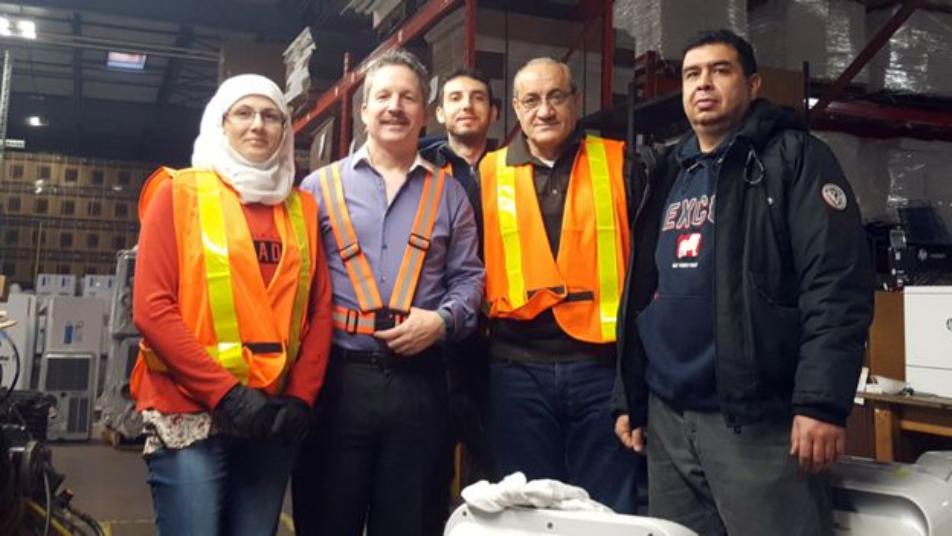 Jim worked hard to ensure the Syrians found work, including employing 28 at his own firm
Orient Net
When Jim Estill, the famous Canadian entrepreneur and philanthropist, saw the horrors of the Syrian war on television, he decided he would do something to help.
A successful Canadian businessman, he vowed to enable Syrian refugees to settle in Canada, simply because "it was the right thing to do".
This was back in 2015, and although the Canadian government was in the process of setting up an official scheme to take in people fleeing Syria, Jim was frustrated by all the delays.
"I could see the crisis happening in Syria, and I did not think [Western] governments were doing things fast enough," says the 62-year old.
So Jim decided he would take matters into his own hands - he would spend 1.5m Canadian dollars ($1.1m) of his own money bringing Syrian refugees from the Middle East to his home city of Guelph, Ontario, some 60 miles (95km) west of Toronto.
He was able to do this thanks to a Canadian scheme called the Private Sponsorship of Refugees Program. Introduced 41 years ago, originally to help people fleeing the aftermath of the Vietnam War, it allows private citizens to welcome and settle refugees in Canada. The catch is that they have to commit to covering the expenses of the new arrivals for the first year.
So Jim paid for an initial 50 Syrian families to relocate to Guelph (population 135,000). Putting some up in his own house, he also rallied church groups and 800 volunteers across the city and worked closely with the local Islamic society.
People provided spare rooms, or helped find empty apartments, and the Salvation Army took the lead in collecting donated clothes to help the refugees stay warm during Canada's cold winters. Meanwhile, Jim arranged for each Syrian family to have access to both English and Arabic mentors, so they could get their children enrolled in schools, start looking for jobs, get bank accounts and so on.
He was also able to give 28 refugees full-time work at the company he owns and runs, the Canadian home appliances firm Danby. This CA$400m annual turnover business has its headquarters in Guelph. For other Syrians, Jim provided the financial guarantees to enable them to set up shops in the city and launch other business ventures.
Jim has now helped sponsor 89 Syrian families - more than 300 people. "It's about the settlement of these good people, and helping them through a hard time," he says.
Ahmad Abed, one of the Syrians who now lives in Guelph, fled his homeland in 2016 after he was hit by shrapnel from a bomb attack in the city of Homs. "Thanks to Mr Estill, and the sponsorship programme, Guelph is my new home," he says. "My wife has even started a socks store in downtown."
Back in 1980, Jim started working in the computer industry after graduating from Ontario's University of Waterloo with an engineering degree. But rather than go down the corporate route, he initially started out by reselling computers out of the boot of his car.
The business - EMJ Data Systems - grew steadily over the next 24 years, before being bought in 2004 by American IT group Synnex for $56m. Jim stayed on to lead Synnex's Canadian division for the next five years.
He also made time to sit as a founding board member of Research in Motion, the Canadian company behind the Blackberry mobile phone, and he had a host of other business investments. In 2009, he decided to retire from Synnex, but maintained a number of executive roles elsewhere, including a directorship at Danby.
In 2015 Jim was made chief executive of Danby and bought the company from its then parent group two years later for an undisclosed sum. Danby makes everything from washing machines to fridges, and dishwashers to air conditioners.
"What I do as a chief executive is build systems and processes, and I did the same with the refugees," says Jim. "It's just like with Danby - I don't make the appliances or sell them [myself], but I orchestrate how everything can work well, and I do what I can to help others get their jobs done."
For his work helping refugees, in March of this year Jim was awarded the Order of Canada, the country's second-highest honour. Canada's Governor General, Julie Payette, who represents Queen Elizabeth II, said that he had shown "outstanding achievement, dedication to the community, and service to the nation". 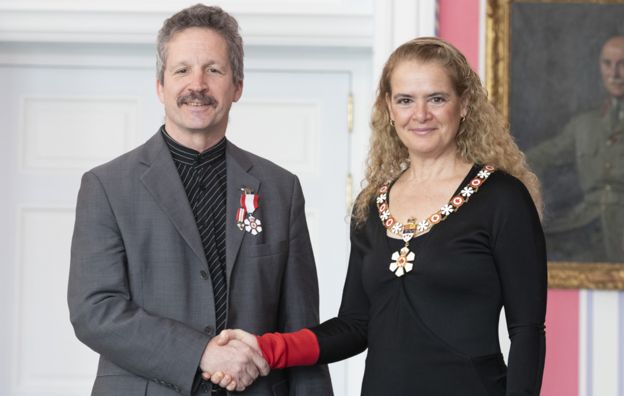 Guelph's mayor Cam Guthrie tells the BBC that Jim is "a down-to-earth, quiet, humble leader". He adds: "I can tell he cares about the people he employs, and the community he's in.
"And by bringing in more people from outside Canada into Guelph, Jim has made people step outside their comfort zone, and open their eyes to see what's happening in the world, beyond their own city."
Jim says that the stories he has heard from the Syrian refugees will stay him for a long time. "Stories of people returning home to houses destroyed, of people speaking to their brother on the phone, which then goes dead, and the brother has been killed.
"These families just want to be happy, just like everyone else. They want a future without fear and violence. And we should be welcoming them, since 99.9% of Canadians are immigrants in some way too."
By David Silverberg, BBC