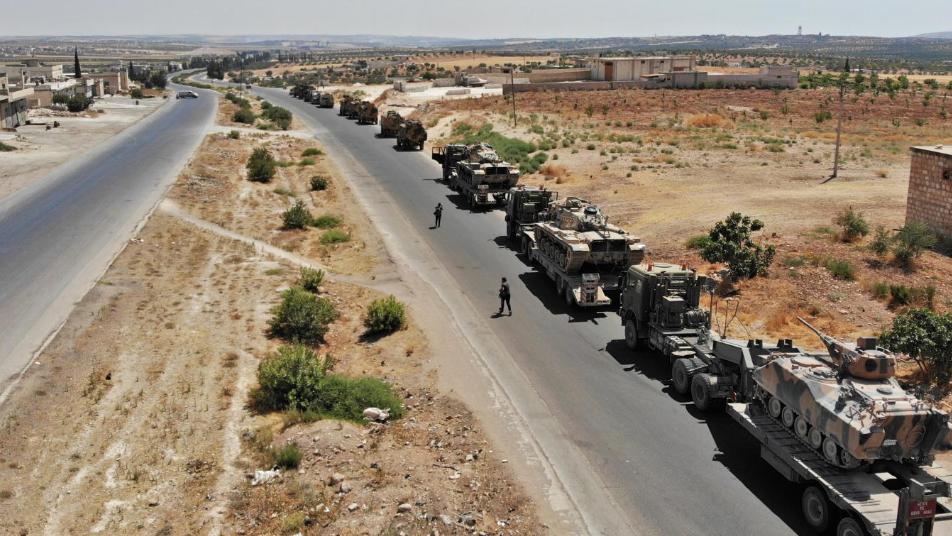 File Photo: A convoy of Turkish military vehicles is pictured near the town of Maar Hitat in northern Syria's Idlib province on 19 August 2019 (AFP)
Orient Net
WH: Turkey to begin military operation in Syria, take ISIS prisoners
The US military will withdraw from northern Syria as Turkey will soon launch a military operation into the area east of Euphrates against the People's Protection Unit (YPG) group, White House said Sunday (October 6).
In a statement, the White House said Turkey will soon carry out its "long-planned operation" into northern Syria.
"The United States Armed Forces will not support or be involved in the operation, and United States forces, having defeated the ISIS territorial 'Caliphate,' will no longer be in the immediate area," said the statement.
The US statement added: "Turkey will now be responsible for all ISIS fighters in the area captured over the past two years in the wake of the defeat of the territorial 'Caliphate' by the United States."
The US criticized "France, Germany, and other European nations" for not repatriating their citizens detained in northern Syria who had joined ISIS.
"The United States will not hold them for what could be many years and great cost to the United States taxpayer," it added.
Turkish presidential spokesman Ibrahim Kalın said Monday the planned "safe zone" aims to clear terrorist elements from the border and return refugees safely to Syria within the framework of Syrian territorial integrity.
The statement came hours after a phone call between President Recep Tayyip Erdogan and his US counterpart Donald Trump, during which a November meeting was planned, according to Turkish presidential sources.
Meanwhile. Turkish Foreign Minister Mevlut Cavusoglu assured on Monday that Turkey is determined to clear its border with Syria of militants and assure the security of the country.
“Since the beginning of the crisis in Syria, we supported the country’s territorial integrity, and we will continue to do so from now on,” Cavusoglu said. “We will contribute to peace and stability in Syria,” he said in a tweet.
Erdogan and Trump exchanged views on bilateral issues as well as the planned safe zone east of the Euphrates River, said Turkey's Communications Directorate.
On Aug. 7, Turkish and US military officials agreed to set up a safe zone in northern Syria and develop a peace corridor to facilitate the movement of displaced Syrians who want to return home. They also agreed to establish a joint operations center.