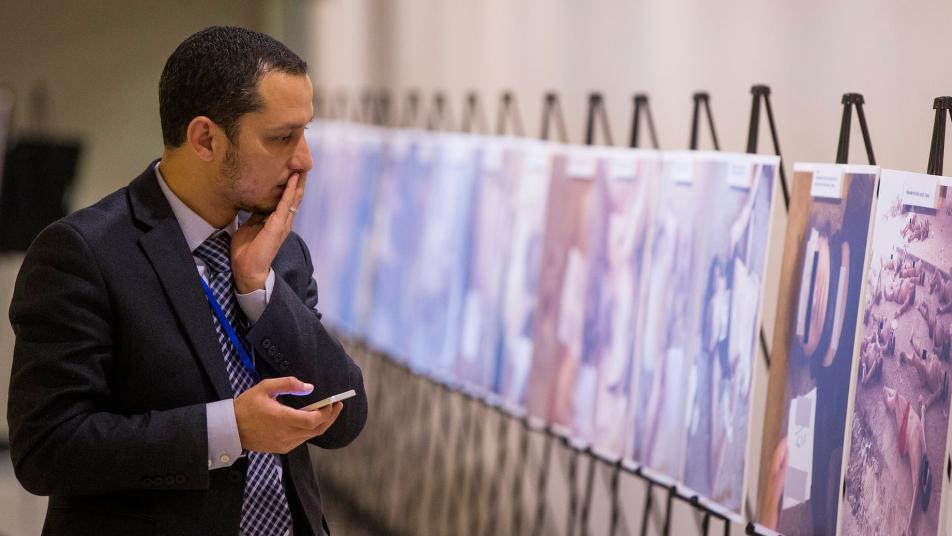 Orient Net
It was 2014 when the Syrian military defector known as “Caesar” first came to Washington to bring forth — at great personal risk — mountains of evidence of mass atrocities being perpetrated in the dungeons of Bashar Assad. Now, five years later, Caesar has returned to ask us why the international community has done nothing to stop Assad’s ongoing slaughter of innocents.
Caesar has produced more than 55,000 photographs of men, women and children tortured to death in Assad’s prisons, which the FBI confirmed as authentic evidence of the torture, starvation and murder of more than 11,000 civilians in custody. The images have been shown around the world. In 2014, Caesar testified as his photos were displayed on the walls of Congress. He warned the United States that over 150,000 more innocents were still imprisoned there, suffering greatly.
Now, in 2019, Caesar is no longer just the voice of those innocent prisoners; he is one of the last remaining figures of the Syrian revolution, which is struggling for survival and international attention.
“The international community deserted us completely, and before it deserted us, it deserted the countless civilians that have been murdered in Syria,” Caesar told me in an interview in Washington, his fourth visit here. “What is the most heartbreaking part of this visit is that every time we have come, we come with a much more disastrous situation than in the past.”
Living in hiding in an undisclosed country, Caesar sacrificed everything to smuggle his evidence out of Syria. He put at risk his entire family and the families of the many who have helped him along the way. At first, there was shock and outrage. The State Department’s ambassador for war crimes said Caesar’s evidence proved the Assad regime had constructed the worst “machinery of cruel death” since the Nazis.
Congressional leaders held more events and promised action. Caesar’s photos were displayed in foreign capitals, on television, at the US Holocaust Memorial Museum and in the halls of the United Nations. The Syrian people had hope. But nothing happened.
The Obama administration created an Atrocities Prevention Board that took no concrete actions to stop this ongoing mass atrocity. The Trump administration wouldn’t even fund the investigation of Syrian war crimes until being publicly embarrassed.
Knowing that Russia could stop any case from reaching the International Criminal Court, lawyers with Caesar’s team initiated a series of local prosecutions in European countries, focused on European citizens found dead in Caesar’s photos. Those cases show some promise.
But here in Washington, Congress cannot even pass simple legislation to sanction the Assad regime and its partners in war crimes, Russia and Iranian regime. Versions of the bill called the Caesar Syria Civilian Protection Act have passed the House three times and the bill has White House support, but Senate Majority Leader Mitch McConnell (R-Ky.) has yet to bring it to the floor as a stand-alone bill.
__new_in_first_article1__
Caesar told me the bill has a real chance of stopping the ongoing horrific torture of thousands, while honoring the hundreds of thousands who already perished.
“Those people are dead and gone, but it’s our responsibility to save the lives of the hundreds of thousands who are still in Assad’s jails,” he said. “And this bill will enshrine into the public’s minds that Assad and his regime are war criminals.”
Caesar also wants to speak up for civilians in other parts of Syria, including those who are right now being bombed in Idlib province, as well as the thousands of civilians starving to death in the Rukban refugee camp, 10 miles from a US military outpost. But he knows political realities will prevent the US government from doing much about those crises. The sanctions bill is the very least Washington can do.
The conventional wisdom is Assad has won and the revolution is futile, but Caesar sees it the opposite way. The mere fact the revolution persists despite all shows that the Syrian people will never stop demanding basic dignity.
“In Idlib province, we see hospitals and schools that are bombed with patients inside and children dying, and this is all happening at the expense of these people who refuse to give up,” Caesar said.
After what Assad has done, there’s no chance he can ever bring stability, much less peace. Peace can never come while thousands of innocent people are being tortured each and every day, many of them to death. Peace can never last unless the hundreds of thousands already murdered get some kind of justice.
Caesar no longer has any faith in governments to help the Syrian people, but he holds out hope the American people and their representatives will do something to help suffering Syrians. Either way, he will never stop telling their stories.
“We were entrusted with a message from the countless civilians that have been sadistically murdered by this regime, a message that had to be delivered,” Caesar said. “The only witnesses for them in their final state were God and the lens of my camera.”
By Josh Rogin
Link to the original source of the Washington Post
قيم هذا المقال 4 0