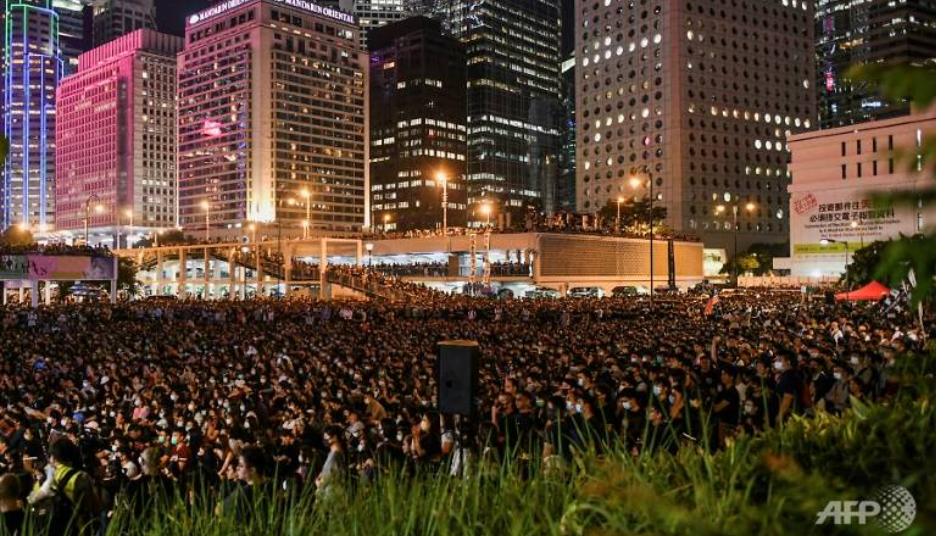 Thousands packed into a square on Hong Kong's main island to hear from arrested activists AFP/Mohd RASFAN
Orient Net
Hong Kong protesters were rebuilding “Lennon Walls” of anti-government graffiti on Saturday (Sep. 28) as they marked the fifth anniversary of the “Umbrella” pro-democracy movement that gridlocked the territory for weeks.
A series of pro- and anti-Beijing protests is planned for the Chinese-ruled city ahead of the 70th anniversary of the People’s Republic of China on Tuesday, including at the consulate of former colonial power Britain.
Anti-government protesters have attacked the legislature, Beijing’s main Liaison Office, occupied the airport, thrown petrol bombs at police, vandalized metro stations and set street fires in more than three months of unrest.
Police have responded with tear gas, water cannon, rubber bullets and occasional live rounds fired into the air.
Protests split Hong Kong entertainment world; many keep silent
“They are not our children,” China supporter Yau Mei-kwang said of the frontline activists. “Because at this age, they should be studying, not running to the airport, hitting people, hitting the police, insulting people. That is not right.”
A pro-democracy protester at one Lennon Wall who only gave his name as Wong defended the use of violence.
“We know that they will not listen if we rally in peace because we are not on the same level,” he said.
Some Lennon Walls were torn down by pro-Beijing activists last weekend. The large mosaics of Post-it notes calling for democracy have cropped up in underpasses, outside shopping centers, at bus stops and universities and outside the Legislative Council.
The anti-government protesters are angry about what they see as creeping Chinese interference in Hong Kong, which returned to China in 1997 under a “one country, two systems” formula guaranteeing freedoms that are not enjoyed on the mainland.
China dismisses the accusation. It has accused foreign governments, including the United States and Britain, of fanning anti-China sentiment.