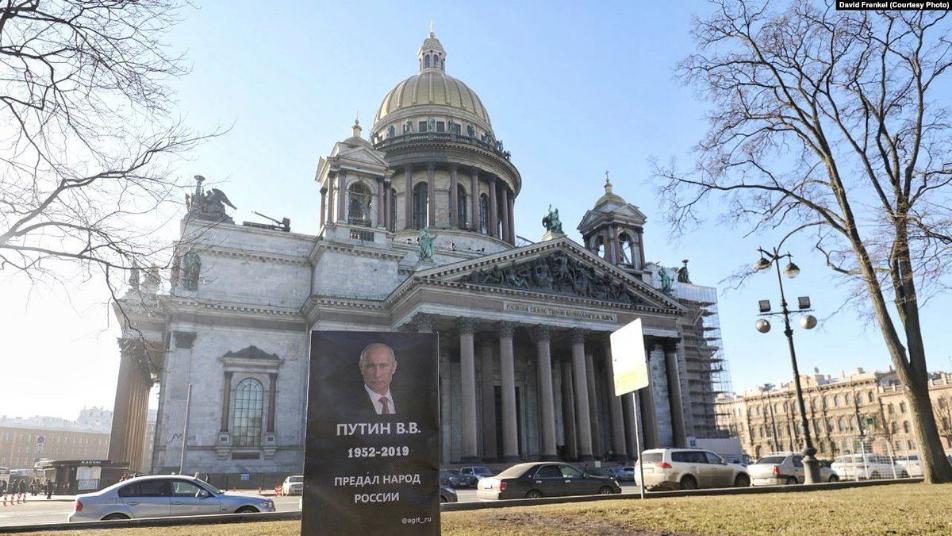 In April, the Agit Rossiya group placed a mock Putin gravestone in front of a cathedral in St.Petersburg.
__new_Underarticle_image_EN__
Orient Net
Russian police detained three activists after photos of President Vladimir Putin and other senior officials were found on crosses at a St. Petersburg cemetery.
The three individuals -- all members of Agit Rossiya, a group that had been involved in a similar action -- were detained on September 21 on charges of desecrating the bodies of the dead as well as their graves.
The police released two of the activists while a third remains in prison and faces up to five years in prison if found guilty.
“Agit Rossiya officially denies involvement in this action, which served as a pretext for the arbitrary criminal prosecution of the movement’s participants,” the activist group said in a September 21 statement on its social media page.
__new_in_first_article1__
Members of the group in April took responsibility for placing a gravestone bearing the name of Putin in front of St. Petersburg’s landmark St. Isaac's Cathedral.
Just weeks earlier, similar pranks were carried out in Moscow and the city of Naberezhnye Chelny, in the Tatarstan region.
Two activists in Naberezhnye Chelny were detained and sentenced in March to jail terms of 28 days and six days respectively.
Based on RFE