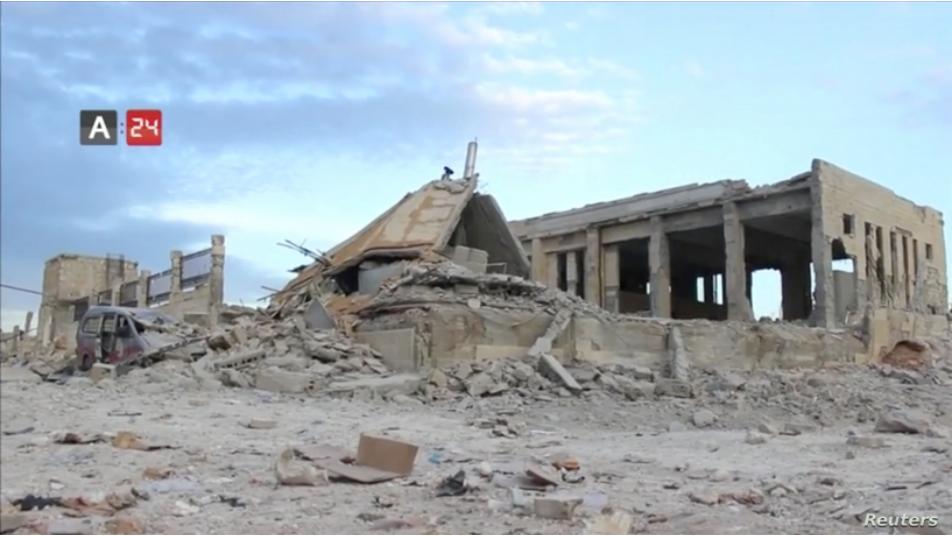 Medical workers increasingly at risk in Syria's Idlib
Rami Fares was carrying out his daily tasks as a medical worker at a local hospital in a rebel-held town near Idlib city in northwest Syria when several airstrikes and missiles hit the town.
As he was trying to call his family to make sure they survived the deadly raid, Fares' workplace, Kafr Nabl Surgical Hospital, was targeted as well.
"Airstrikes hitting the hospital lasted for about an hour," Fares, 30, told VOA, recalling the June attack, reportedly carried out by Assad regime warplanes on the town of Kafr Nabl, 50 kilometers south of Idlib.
"The hardest strike was when a barrel bomb hit the entrance of the hospital and the pressure of the explosion threw me to the floor. We had to evacuate the hospital that day," he said.
Because the hospital had been built underground to protect patients from heavy bombings, no one was killed in that attack.
Years of deadly conflict in the country has led Syrians to build structures that are able to withstand the constant shelling. That has led underground shelters and hideouts to become common throughout the country.
Fares said his family was also lucky to be in one of the nearby underground shelters when the bombing struck their home. Unsettled by the attack, he sent his wife and two sons to Turkey.
Assad regime militias and Russian warplanes have been pounding Kafr Nabl and other towns in Idlib governorate since late 2015, claiming they are going after Islamist militants affiliated with al-Qaida.
Rights organizations, however, say civilian targets have been greatly affected, with airstrikes often targeting medical facilities and health workers.
__new_in_first_article1__
According to UNICEF, there have been 25 confirmed attacks on health care facilities in Idlib since late April that have left at least six health workers dead.
In Kafr Nabl alone, bombings in May put the Hikma and Kafr Nabl surgical hospitals out of service, limiting access to health care for about 64,000 children.
"These attacks compound an already dire health situation in the country, where close to half of all health facilities are either nonfunctional or partially functional," the UN's children's organization said in a June statement.
Since the beginning of the Syrian conflict in 2011, more than 850 medical workers have been killed, according to the Syrian American Medical Society (SAMS), a US-based group that supports medical facilities in rebel-held areas in Syria.
And despite a unilateral ceasefire in Idlib that Russia announced two weeks ago, Assad regime militias have continued targeting civilians there, local sources said.
In a bid to prevent attacks on health facilities and workers, the UN has set up a humanitarian deconfliction system, requiring nongovernmental organizations in the war-torn country to share the locations of the medical facilities with the UN Office for the Coordination of Humanitarian Affairs (OCHA). OCHA, in turn, shares these locations with the warring sides, particularly those with air power.
Activists, however, say the system has proven ineffective as scores of medical facilities whose locations had already been given to the OCHA were subject to Syrian and Russian airstrikes.
"We provided the coordinates of the Kafr Nabl hospital to a UN committee to document its location and [those of other] health facilities in Idlib," said medical worker Fares. "One week later, we were surprised that the hospital and other medical facilities were attacked."
Documented attacks
__new_in_first_article2__
New York-based Physicians for Human Rights (PHR) said it has confirmed 578 attacks on 350 separate facilities and documented the killing of 890 medical personnel from March 2011 to July 2019 across Syria.
Susannah Sirkin, director of policy at PHR, said that Russia's representative at the UN did not deny the attacks on medical facilities in Syria in a Security Council session in late July. Russia, however, insists that it targets "terrorist" groups who use medical facilities as hideouts.
"Russia also claimed that the targeted health facilities are not functioning ones, which contradicts the representative of OCHA, Mark Lowcock, who confirmed that they are functioning health facilities and they are supported by the UN," Sirkin said.
'Scorched-earth assault'
Syria used to be one of the signatory states to the Geneva Conventions, which prevent warring parties from attacking people, including aid workers, who are not part of the conflict.
"It is part of a scorched-earth assault to destroy civilian infrastructure and anything in its way. The Assad regime is obliterating civilian infrastructure," Sirkin said.
According the New York-based Human Rights Watch (HRW), an estimated 4 million people in northwestern Syria need medical assistance, even as attacks on medical facilities continue to deprive people from getting lifesaving care.
"This pattern of continued forced displacement, and damage or destruction of essential civilian infrastructure such as health facilities, is a deeply disturbing reality in the Syrian conflict," HRW said in a report published this month.
Click here for the original report
قيم هذا المقال 2 0