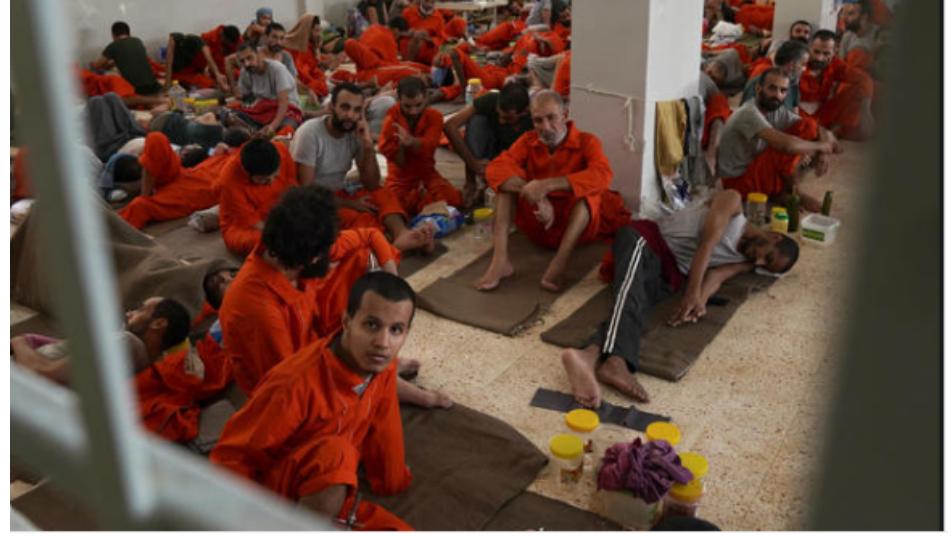 Orient Net - CBS
A US-backed Syrian militia running a prison packed with thousands of alleged ISIS fighters is struggling to keep control of the detainees. The prisoners want to return to their home countries, and their jailers warn that if something isn't done to relieve the burden, the accused terrorists could end up back in the fight.
The militia let CBS News correspondent Holly Williams and her team inside the high-security prison in northeast Syria — the first time a television camera has been allowed in. They wouldn't even permit video showing the outside of the facility, given the tense security situation in the region.
President Trump has called on European countries to bring home their nationals who joined ISIS in Syria, so it was a surprise for Williams to find prisoners who said they were American.
Williams said the prison is like the United Nations — she met people from Belgium, the Netherlands and Germany — but everyone there is accused of joining ISIS. They signed up for an Islamic paradise but ended up living packed like sardines in cells, some of them with terrible injuries from the battlefield.
"Are you American?" Williams asked one man through a cell door. "Yes," he replied. Lirim Sylejmani told CBS News that he left his home in Chicago to live under ISIS in 2015, and he's unrepentant.
"The choices that I made, in somebody's eyes, the wrong choices, so I face jail time."
But he doesn't believe he made the wrong decision, saying he "just wanted to live under Islamic law."
There are about 5,000 prisoners in the facility run by the Syrian Democratic Forces (SDF), a largely Kurdish militia that has worked closely with the US for years in the fight against ISIS. The guards say many of the detainees are dangerous. If they escape, there are fears they would re-join the ISIS insurgents who continue to carry out attacks.
The guards showed Williams security video of an attempted prison break from just three days before her visit.
A group of inmates pretended one of their cellmates was sick and called the guards in. Then they charged the guards and ran out of the cell. They pull the door off its hinges and charged even further down the corridor, but eventually, they were brought under control, but that was just one of two failed escape attempts last week.
The SDF commanders running the prison want to send the foreign detainees home, but in most cases, their own governments don't want them back, even when they're children.
Williams met another prisoner who identified himself as a 17-year-old US citizen from New York City. He said his parents brought him to join ISIS. He didn't want to appear on camera. Like nearly all of the foreigners in the overcrowded facility, he is desperate to leave.
Asked if he wants to go back to the US, Lirim Sylejmani, the prisoner from Chicago, said: "Of course. I'm gonna die soon here. I'm sick."
Williams pointed out that if he was brought back to the US, he would almost certainly face jail time there.
"I know," he said. "I know, I know."
The SDF forces that run the prison manage several others across northern Syria. Together they hold some 12,000 ISIS suspects, including 4,500 foreigners. The SDF told CBS News that if foreign governments won't take their citizens back, they should help secure the prisons to prevent mass escapes, or set up an international court in Syria to try them.
Click here for the original report