US military officials in Turkey for Syria safe zone talks 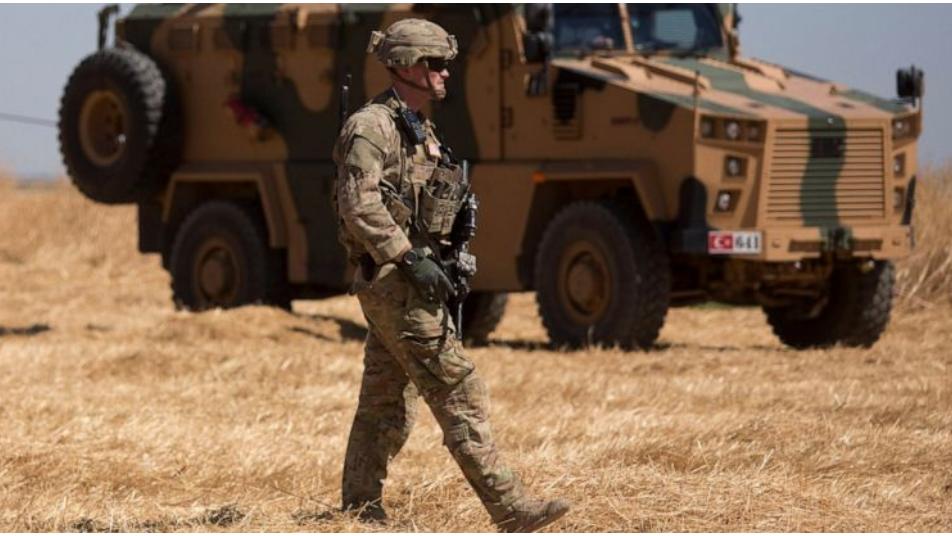 A US soldier walks past a Turkish armored vehicle during the first joint ground patrol of America and Turkish forces in the so-called "safe zone" on the Syrian side of the border with Turkey, near Tal Abyad, Syria, Sunday, Sept. 8, 2019. (AP Photo/Maya Al
Orient Net
Turkey's defense ministry says two top US military officials are in Turkey for talks over a planned "safe zone" in northeast Syrian.
A ministry statement said a delegation headed by Lt. Gen. Stephen Twitty, deputy commander of the US European Command, and Lt. Gen. Thomas Bergeson, deputy commander of the US Central Command, would meet with Turkish military officials on Tuesday (September 10).
Activities for the formation of a safe zone in the northern Syria and east of the Euphrates are ongoing, the ministry added.
Their visit comes days after Turkish and US troops conducted their first joint ground patrol of the "safe zone."
Turkish President Recep Tayyip Erdogan says rifts remain in the way Turkey and the US envision the zone.
On Aug. 7, Turkish and US military officials agreed to set up a safe zone in northern Syria and develop a peace corridor to facilitate the movement of displaced Syrians who want to return home. They also agreed to establish a joint operations center.