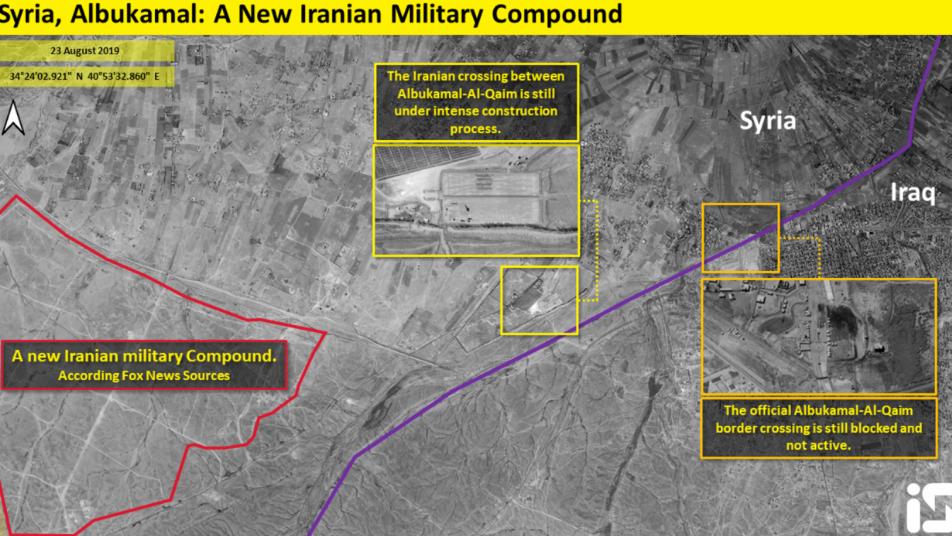 Imam Ali compound (file photo - ISI)
Orient Net
Several explosions have been heard in Deir ez-Zoor countryside, Deir ez-Zoor 24 and Euphrates Post reported, where Iraqi militia sites were targeted inside the Syrian city near the Iraqi border.
At least eight rockets targeted Iranian militia headquarters in Al-Bukamal city on Monday (September 8) midnight.
Several Iranian regime-backed militiamen were killed and injured in the strike, according to observatory groups. Hezbollah militia and the Israeli army exchanged cross-border fire earlier this month after a drone attack last week.
Rockets were also fired at Israel from the outskirts of Damascus by a Shi’ite militia operating under the command of the Iranian regime’s Islamic Revolutionary Guards Quds Force, the Israel Defense Forces said on Monday.
A number of rockets were launched from Syrian territory but failed to hit Israeli territory, the statement said. The IDF holds the Assad regime responsible for all events taking place in Syria. The rocket fire comes more than a week after an Israeli airstrike hit a team of IRGC members with “killer drones” south of Damascus.
Last week Fox News reported that the Iranian military is building a new military base in Syria, citing multiple Western intelligence sources.
The report said that the new Iranian compound, dubbed Imam Ali and situated on the Syria-Iraq border where Monday's alleged strike took place, is being built from scratch by the Al-Quds forces and its construction was approved by top Tehran leaders.

The large military base, being constructed near the Al-Bukamal border crossing with Iraq is said to be less than 300 km. from an American military position.