Half of Idlib's children may miss school 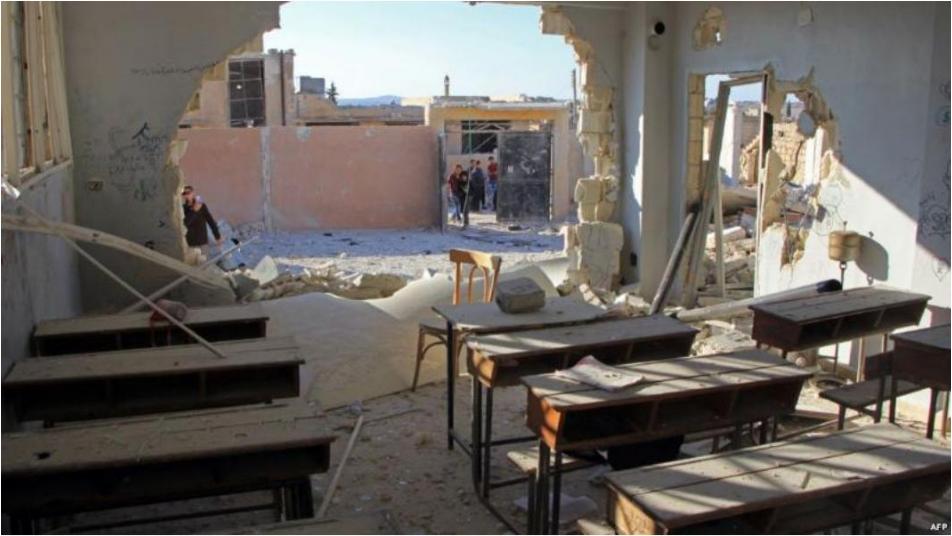 File photo
Orient Net
Thousands of children due to start the school year in North West Syria may not have access to education as due to the latest escalation in violence 87 educational facilities have been damaged or impacted by bombardment, Save the Children said on Wednesday (September 4).
More than 200 schools are currently being used as shelters for people fleeing the conflict, according to Save the Children’s partner Hurras Network.
Over the past four months, airstrikes have forced people to completely abandon 17 towns in North West Syria.  Around half a million people across Idlib have been displaced by Assad and Russian bombardment.  As the new school year starts, the remaining functional schools can only accommodate up to 300,000 of the 650,000 school-age children.
Out of the 1,193 schools in the area, 635 continue to be operational, while 353 have been abandoned or damaged and 205 are used as collective shelters, the report said.
12-year-old Rasha was forced to flee the escalating violence with her family. She said:
“I was small before the war, I was living a nice, good and safe life with my family… my life has changed a lot.  I lost the most precious person to me - I lost my father who was everything to me.
“The war has affected my education - we were displaced and didn’t stick to school because of the situation. When I grow up and become a doctor, I want to treat children who are injured and in need.”
More than 500 people, including more than 140 children, have been killed in Idlib since late April.
Save the Children’s Syria Country Director, Sonia Khush, said:
“Teachers are telling us that parents are pleading with them to shut schools for fear of them being attacked. How can the international community stand by while the bar for standards of living has dropped so low for thousands of children in Idlib? How can we accept that they will be denied an education because there are not enough functioning schools for them?
“The school year is set to start in the last week of September and aid agencies are working to set up spaces where children can learn. But funding is urgently needed to maintain and increase the current levels of emergency response.
“Some families have now been displaced up to 10 times, with some sheltering in schools or mosques and others sleeping in open fields under trees.  Many children are dealing with losing their homes, loss and grief. They should not have to fear losing their lives whilst they try to learn.”
North West Syria has seen its population double from 1.5 to 3 million people — including more than 1 million children and 750,000 women — in just a few years as civilians were displaced from other parts of Syria. At the same time, its infrastructure and services have been impacted by more than eight years of fighting, leaving thousands without proper access to education and healthcare.
10-year-old Ali was displaced from his village in Idlib and has recently returned to find his school damaged by an airstrike. He said:
“I saw my school was destroyed and broken down and it made me so sad. My friends and I, we will go back and study in it. I love my school –my wish is that it does not get bombed and destroyed again because we will rebuild it and make it better than before.
“I love to study. I want to become a doctor to treat people who are in need and serve my country.”
Humanitarian agencies are already struggling to respond to the displacement across North West Syria. Civilian infrastructure, including schools and hospitals, continue to be damaged or destroyed. In the last two weeks, at least four medical facilities in North West Syria have been impacted by the violence, as well as a water station serving more than 80,000 people, settlements for displaced civilians and markets and bakeries according to the UN.
Save the Children called on all parties to stop this war on children. Members of the UN Security Council should support the draft resolution proposing a ceasefire that can put an end to the deteriorating humanitarian situation in Idlib. The Syrian conflict must not be allowed to become the moment where the violation of fundamental human rights and international laws designed to protect vulnerable children becomes the new normal.