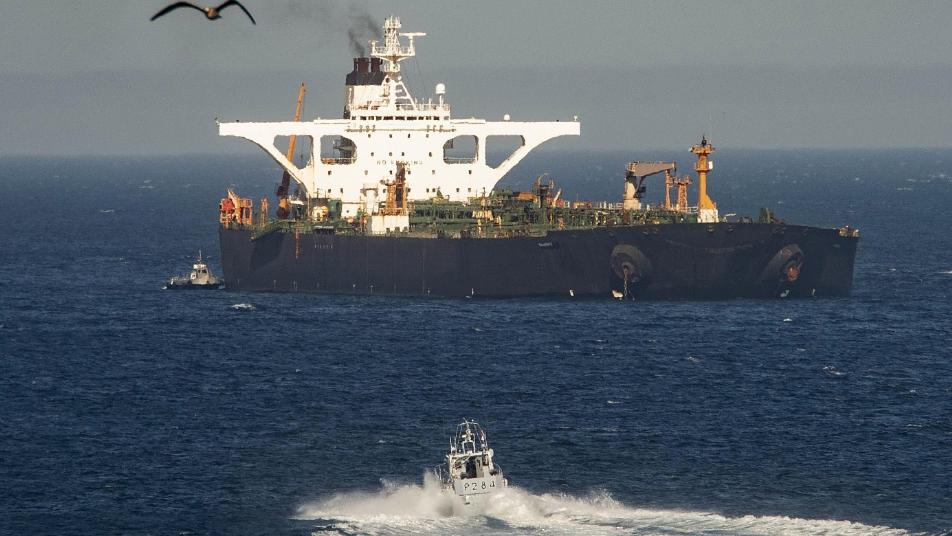 The Adrian Darya supertanker, formerly the Grace 1, seen off the coast of Gibraltar on August 18, 2019. (AP/Marcos Moreno)

The Adrian Darya 1, the Iranian regime’s oil tanker that the US has pursued for several days, is now fewer than 10 nautical miles from the shores of Syria, intelligence sources tell Fox News.
The captain of the vessel, Akhilesh Kumar, has been refusing to cooperate with a planned oil delivery and has asked to be dismissed or replaced, the sources added.
The ship, formerly known as the Grace 1, turned off its tracking systems as it sailed toward Syria on Monday afternoon.
By entering Syrian waters, the vessel was defying a commitment to the United Kingdom that allowed its release after it was detained in the Strait of Gibraltar.
__new_in_first_article1__
The ship has been carrying 2.1 million barrels of Iranian crude oil worth around $130 million. On Friday, the Treasury Department hit the tanker and its captain with sanctions, among the latest punishments targeting Iran's energy industry.
Iranian oil tankers often turn off their Automatic Tracking Systems in attempts to hide cargo.
Tensions are high in the Persian Gulf after a summer filled with attacks by Iran and Iranian proxies on Western oil tankers and infrastructure.
The Iranians have demanded the United States ease sanctions on the Islamic Republic. Iranian Foreign Minister Mohammed Zarif said Tuesday that Iran would break a third commitment in the 2015 nuclear deal if its European signatories -- Great Britain, France and Germany -- couldn’t salvage the deal by Thursday. Earlier this year, Iran surpassed the uranium enrichment and stockpile limits laid out in the agreement.
The Trump administration Tuesday afternoon imposed still more sanctions on Iranian regime, this time targeting the country’s space agency.
قيم هذا المقال 18 0