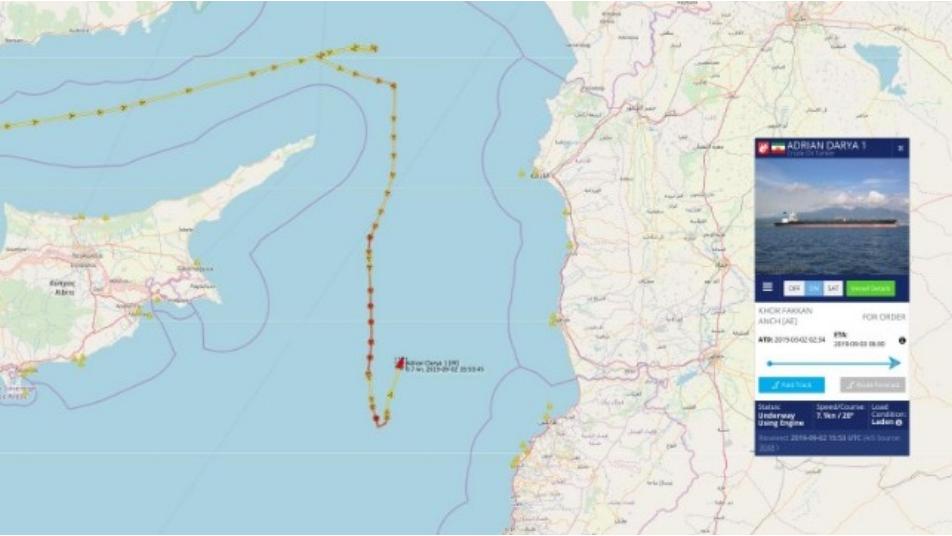 MarineTraffic via TankerTrackers / Twitter
The US-blacklisted tanker Adrian Darya 1 has gone "dark" off the coast of Syria, where she is widely expected to deliver her controversial cargo of Iranian crude oil, Maritime Executive reported.
The Adrian Darya (ex-name Grace 1) was boarded by Royal Marines and seized at Gibraltar on July 4 and released on August 16. After a meandering jourey eastwards, she arrived off the coast of Lebanon Sunday night. On Monday (September 3) morning, she made a 160-degree turn northwards towards Syria, and her AIS signal disappeared at about 1600 UTC.
Media spotlight aside, the Darya's sanctioned cargo and sanctioned destination are both a matter of routine, analysts at TankerTrackers pointed out Monday. In August, while the attention of the US State Department has been closely focused on her journey, other Iranian tankers have delivered millions of barrels of Iranian oil to Syria via the Suez Canal, just as they have for years. The Darya's size and her route around the Cape of Good Hope set her apart, but Suezmax deliveries are a regular occurrence.
__new_in_first_article1__
During the Darya's ordeal, Assad regime has received Iranian crude oil from the tankers Argo 1 (700,000 barrels), Savior (one million barrels, pending delivery), Silvia 1 (one million barrels), Stark 1 (one million barrels, pending visual confirmation) and Sarak (one million barrels, pending delivery), according to the firm. Over the year ending July 2019, Assad regime has imported an estimated 17 million barrels of Iranian crude - nearly ten times the amount in the Darya's tanks.
All Iranian tankers, shipping companies and oil cargoes are already covered by American sanctions, but the US Treasury has specifically designated the Adrian Darya 1 as a "blocked property" using anti-terrorism rules. It has also blacklisted the vessel's master, identified as Capt. Akhilesh Kumar, using measures targeting "those providing support to terrorism or acts of terrorism."
“Vessels like the Adrian Darya 1 enable the [Iranian regime’s Islamic Revolutionary Guard Corps] to ship and transfer large volumes of oil, which they attempt to mask and sell illicitly to fund the regime’s malign activities and propagate terrorism,” said Sigal Mandelker, Treasury's under-secretary for terrorism. “Anyone providing support to the Adrian Darya 1 risks being sanctioned. The path to relief is to change course and not allow the IRGC-QF to profit from illicit oil sales.”
In general, US persons are now prohibited from conducting business with either the Adrian Darya 1 or with Capt. Kumar. American entities are also required to implement a freeze on any property or assets associated with the vessel or her master.
قيم هذا المقال