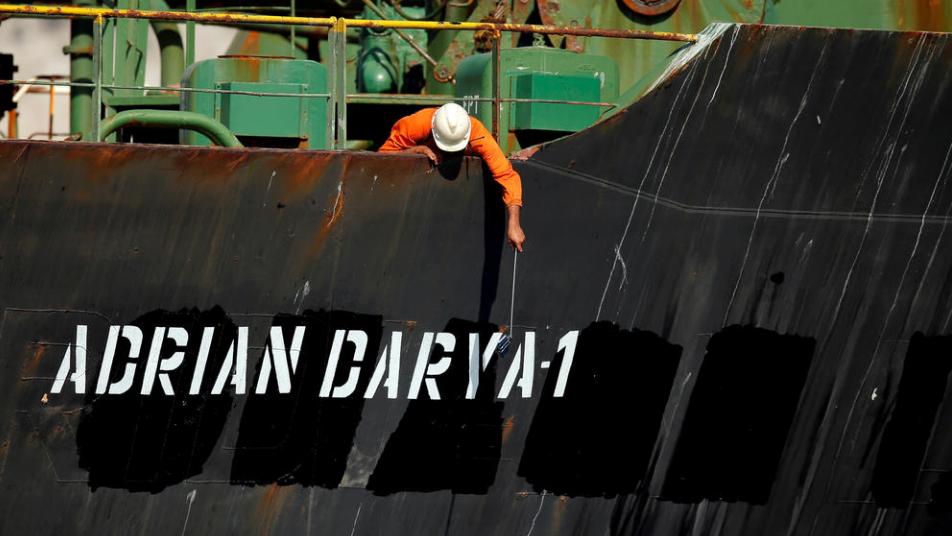 FILE PHOTO - Iranian oil tanker Adrian Darya 1 as it sits anchored after the Supreme Court of the British territory lifted its detention order, in the Strait of Gibraltar. Photo: Reuters
Iranian regime has sold the oil from a tanker released by Gibraltar after weeks in the custody of British Royal Marines and the vessel’s owner will decide on its next destination, IRIB news agency quoted an Iranian government spokesman as saying on Monday (August 26).
Separately, Tehran - embroiled in a spiralling confrontation with Washington over US sanctions meant to strangle Iranian oil exports - announced that it had deployed a naval destroyer with cruise missiles to help secure Iranian ships.
The Iranian regime spokesman did not identify the recipient of the oil carried by the Adrian Darya tanker. After Gibraltar freed the vessel on Aug. 18, the United States said it would take every action it could to prevent it delivering oil to Syria in contravention of US sanctions.
“The Islamic Republic of Iran has sold the oil of this ship and now the owner and purchaser of this oil will decide the destination of the cargo,” Iranian regime spokesman Ali Rabiei said.
__new_in_first_article1__
Refinitiv Eikon shipping data showed on Monday that the tanker was no longer recorded as bound for Turkey, its indicated destination at the weekend. No new destination was given.
The tanker’s location is currently south of mainland Greece, west of the island of Crete, the data showed.
The vessel, laden with 2 million barrels of oil, had previously been heading to the port of Kalamata in southern Greece after its release by Gibraltar. But Greece said it would not offer any facilities to the vessel.
Soon after the detention order was lifted, a US federal court ordered the seizure of the vessel on different grounds, but that petition was rejected by Gibraltar.
قيم هذا المقال