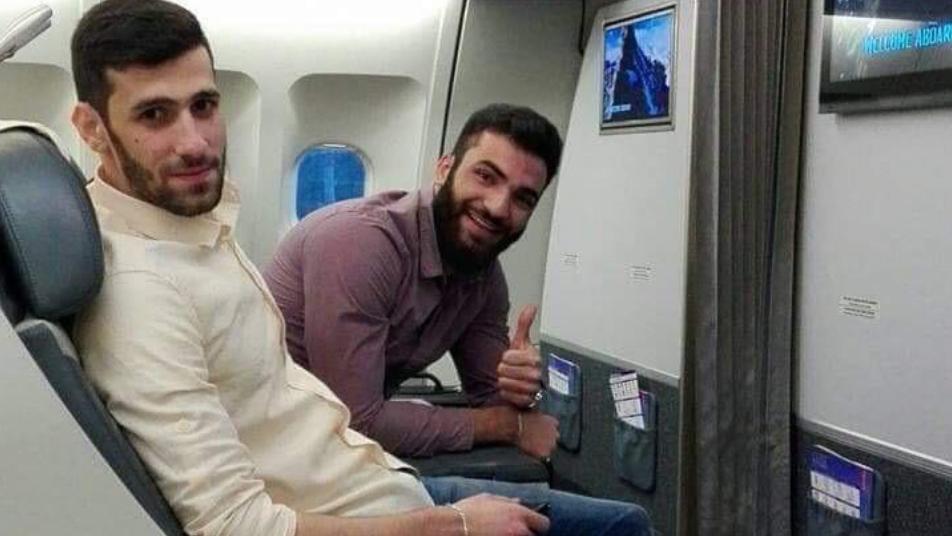 Hassan Yousef Zabeeb, left, and Yasser Ahmad Daher, two Hezbollah militiamen killed in an Israeli airstrike in Syria in response to a plot to launch armed drones into Israel, fly to Iran from Lebanon in an undated photograph. (IDF)
Orient Net
Military says Hassan Yousef Zabeeb and Yasser Ahmad Daher, traveled to Islamic Republic multiple times and worked under IRGC Quds Force
The Israel Defense Forces on Monday (August 26) identified two of the people killed in its airstrikes in Syria on Saturday as Lebanese nationals trained to operate attack drones by the Iranian regime’s military.
Late Saturday night, the IDF conducted a series of airstrikes in Syria against a group led by Iranian regime’s Islamic Revolutionary Guard Corps (IRGC), which had been planning to fly kamikaze-style drones carrying explosives into targets in northern Israel.
At least five people were killed in the strike, including two Hezbollah members and an IRGC operative. Two others who were not immediately identified.
The Israeli army identified two of those killed as Lebanese nationals Hassan Yousef Zabeeb, 23, from the town of Nabatieh, and Yasser Ahmad Daher, 22, of Blida.
On Sunday night, head of the Hezbollah militia Hassan Nasrallah said the two men were members of his organization.
According to the IDF, Zabeeb and Daher were working on behalf of the Quds Force, under the command of IRGC leader Qassem Soleimani, who led the drone plot.
“The men who were killed spent time in Iran on a number of occasions in recent years. As part of their time in Iran, they went through specific training programs in the Quds Force on operating unmanned aerial vehicles and explosive drones,” the army said in a statement.
The military distributed photographs of the two men traveling together on Iran’s Mahan airline, which Israel and the United States have identified as a major transporter of weaponry and materiel to Hezbollah and other Iranian proxies in Syria and Lebanon.
“The operatives were working in recent weeks in Shiite militias under the command of the Quds Forces to carry out drone attacks against targets in Israel,” the IDF said.
On Sunday night, the army released footage of what it said was one such failed attempt by pro-Iranian operatives to launch an explosives-laden drone into northern Israel from Syria last Thursday.
In the video from Thursday, four men can be seen carrying the lightweight aircraft as they walk through fields. The IDF said it was taken near the Syrian town of Erneh, across from the Israeli Golan Heights. The military refused to comment on what type of drone the Iranian operatives were using.
The military said it foiled the attempt to launch the unmanned aerial vehicle, but declined to specify how. IDF spokesman Lt. Col. Jonathan Conricus said the method was “not necessarily kinetic” and the army’s Arabic-language spokesman said in a tweet the military “confused” the pro-Iranian operatives, which appeared to indicate that a form of electronic warfare was used.
The army on Sunday said the failed drone attacks were part of a plot by IRGC to target military installations and national infrastructure in northern Israel from Syria.
According to the IDF, the drones and IRGC advisers were flown into Syria from Tehran several weeks ago.
The plan was personally overseen by Soleimani, IDF Chief of Staff Aviv Kohavi said.
According to Conricus, four members of Iran’s IRGC Quds Force were sent to Syria several weeks ago to form a team that would fly explosive-laden kamikaze drones into targets in northern Israel.
“These attack drones would carry several kilograms of explosives,” he said.
Conricus said the military has been monitoring the Iranian plot for “a number of weeks.”
When the IDF spotted the Iran-led team — made up of the four IRGC advisers and Shiite militiamen — moving to launch the drones again on Saturday night, the Israeli Air Force took action and bombed their base.
A satellite image distributed by Israeli private intelligence firm ImageSat International showed that the compound had been completely destroyed. 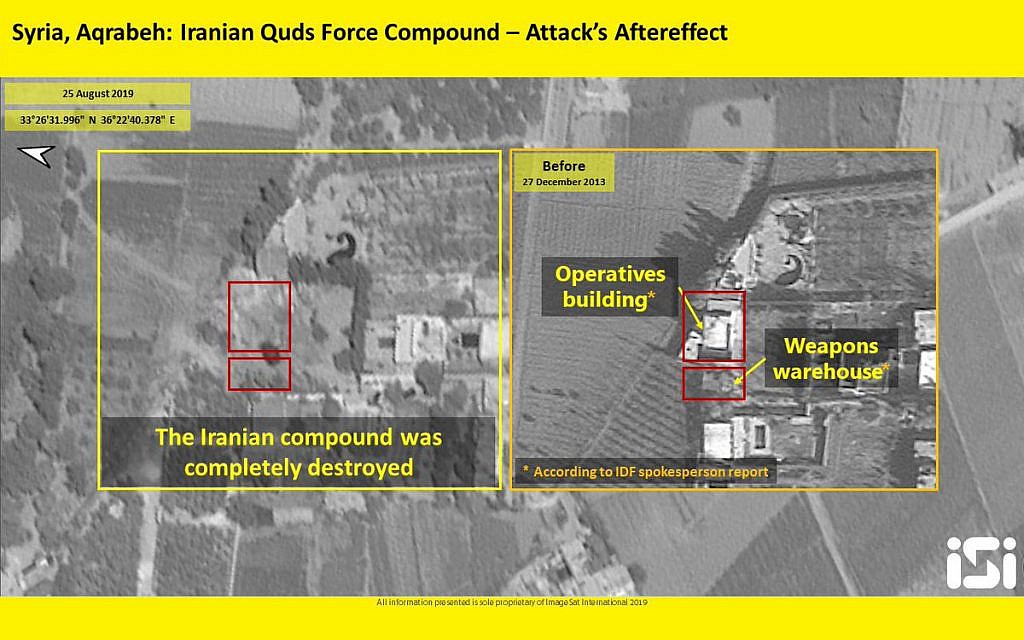 “Thanks to a substantial intelligence effort, an Iranian attack was thwarted and harm to Israel was prevented,” the head of Military Intelligence Tamir Heyman said in a statement.
Conricus said forces had been put on high alert near the Syrian frontier after the attack.
A top Revolutionary Guards commander on Sunday denied the Israeli claims.
“Israel and the United States do not have the power to attack Iran’s various centers, and our [military] advisory centers have not been harmed,” Mohsen Rezaei, who is also secretary of Iran’s Expediency Council, a powerful state body, told the semi-official ILNA news agency on Sunday.
The late-night airstrike, which triggered Syrian anti-aircraft fire, appeared to be one of the most intense attacks by Israeli forces on Iranian targets in Syria.
Based on The Times of Israel