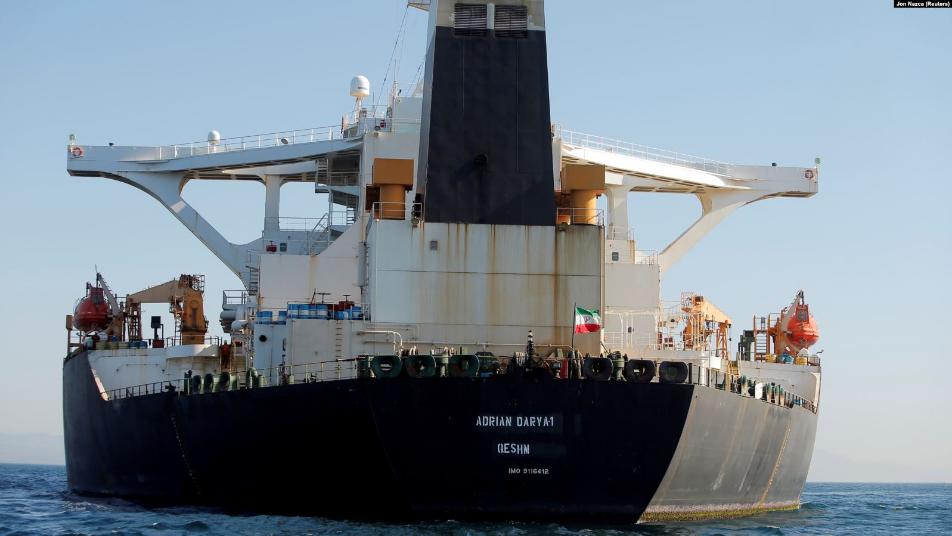 Iranian regime's tanker heads to Turkey's Mersin
An Iranian regime’s oil tanker that has been pursued by the United States in the Mediterranean Sea for weeks now appears to be heading for a port in Turkey, RFE reported.
The crew of the Adrian Darya 1, formerly known as Grace 1, changed its listed destination in its Automatic Identification System (AIS) to Mesrin, Turkey, early on August 24.
Experts note that the crew of a vessel can input any destination in the AIS system.
The ship-tracking website MarineTraffic.com showed the Adrian Darya's position as just south of Sicily in the Mediterranean Sea.
__new_in_first_article1__
Mersin is a port city in southern Turkey with an oil terminal. It is about 200 kilometers northwest of a refinery in Baniyas, Syria, where the Adrian Darya 1 was reported to be heading before being seized off Gibraltar in early July.
The United States has issued a warrant to seize the tanker on the grounds that it had links to Iran's Islamic Revolutionary Guards Corps (IRGC), which it designates as a terrorist organization.
News of a change in the vessel’s destination comes days after Athens denied on August 22 that the tanker was heading for Greece after ship-tracking data earlier in the week showed it heading toward the Greek port of Kalamata.
The Adrian Darya, which is carrying Iranian crude worth some $130 million, was first detained off Gibraltar on July 4 on suspicion it was shipping oil to Syria in violation of European Union sanctions.
قيم هذا المقال