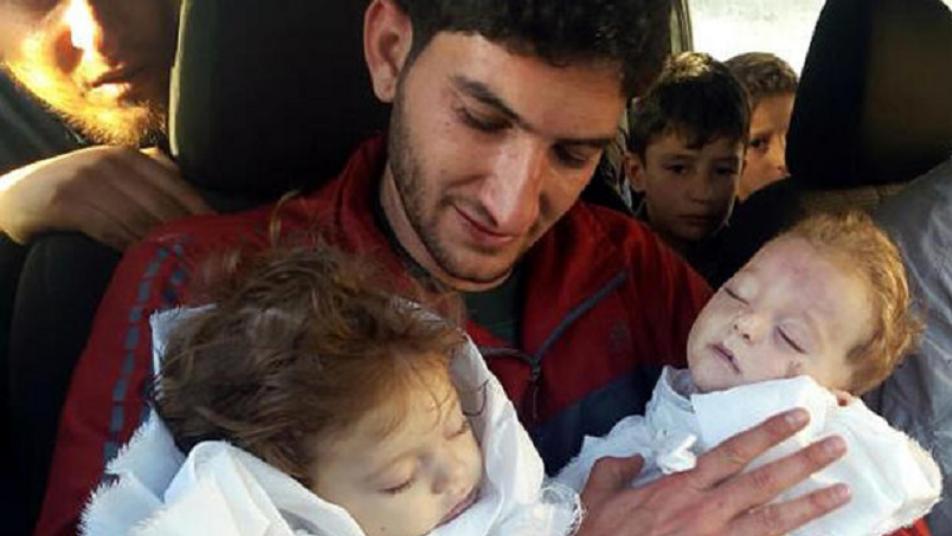 Syrian man Abdul-Hamid Alyousef, 29, carries his twin babies who were killed during the Assad chemical weapons attack in Khan Sheikhoun, in the northern province of Idlib, Syria, April 4, 2017. AP
Orient Net
On Tuesday, the Syrian opposition abandoned one of their last strongholds, Khan Sheikhoun, in Idlib province, and Assad militias moved in — exactly seven years since President Obama drew his infamous “red line.”
In a speech on Aug. 20, 2012, Obama promised to intervene militarily in Syria if Assad dropped chemical gas on his own people, telling reporters: "I have at this point not ordered military engagement in this situation.... a red line for us would be if we start seeing a whole bunch of chemical weapons moving around or being utilized.''
But when Assad dropped sarin gas on a suburb of Damascus the following year, Obama did not send war planes or troops. To this day, US officials who were in charge of formulating the United States’ response to those atrocities are divided over what the course of action should have been.
But they all agree the US strategy was a failure. “What is clear is that people questioned US resolve after that episode," former National Security Council member Rob Malley told VICE News.
Malley thinks the United States had no business getting involved in a Middle East conflict. “Our experience throughout the region, in Afghanistan, Libya, Iraq, all of those, should teach us a lesson in humility about the inability of the United States to truly affect the trajectory of countries in the domestic politics through military intervention," he told VICE News. “Trying to reshape Syria, reshape Iraq… Those are fantasies, and the graveyards are full of them.”
Among those who share Malley’s view on Iraq military intervention is former Ambassador Robert Ford, who was the US ambassador to Syria until Washington cut diplomatic ties with Assad. Deputy US Ambassador to Iraq from 2008 to 2010, he remembers the quagmire of the Iraq War. “After trying to extricate the American forces out of Iraq, the last thing any of us wanted at the State Department was to go through that again,” he said.
But that's where the agreement ends. For retired Ambassador William Burns, former Deputy Secretary of State and the author of "The Back Channel: A Memoir of American Diplomacy and the Case for Its Renewal," the US should have intervened when Assad began dropping chemical weapons on the Syrian population, on Aug. 21, 2013, in Ghouta, outside of Damascus. On that day six years ago, almost 300 people died of sarin gas poisoning.
“I think it was a mistake,” he told VICE News. "It just seemed to me that both in terms of defending an important international norm and also in terms of the signal that we were sending to a wider audience in the region, that it was a mistake not to act."
The United States did intervene against ISIS in Syria and Iraq. But by the time the ISIS was defeated, Assad had regained most of Syrian territory.
Both Burns and Ford believe that a greater commitment to support the rebellion at the beginning of the uprising could have ended the war and forced Assad to give up power. The CIA was providing training to the rebellion during the early days of the war.
But Obama didn’t give the CIA the same kind of power they had in Libya, and the rebels were never able to gain the upper hand. According to former CIA Director Leon Panetta, who was secretary of defense at the time, "There never was that comprehensive effort to really pull the opposition together in Syria. And because of that, everything about Syria became a quagmire.”
Over 400,000 people have died in the conflict. Assad will go down in history as a war criminal. But he will also go down as a leader who could outsmart US leadership.
“Assad is not stupid,” Panetta said. “I think he took a calculated gamble based on the fact that it was pretty clear that the president did not want to militarily engage in Syria the way we had engaged in Libya.”
But for Panetta, letting Assad get away with it set a dangerous precedent. "I think that if the United States is not there and willing to say to the rest of the world, 'We have to work together to stop these atrocities from happening,' that it creates a vacuum [...] And so I really worry today that what Obama began because he didn't want to have the United States involved in another war in the Middle East, has now become a policy that says the United States is going to do absolutely nothing."
Edited according to Orient Net
Link to the original source of the VICE