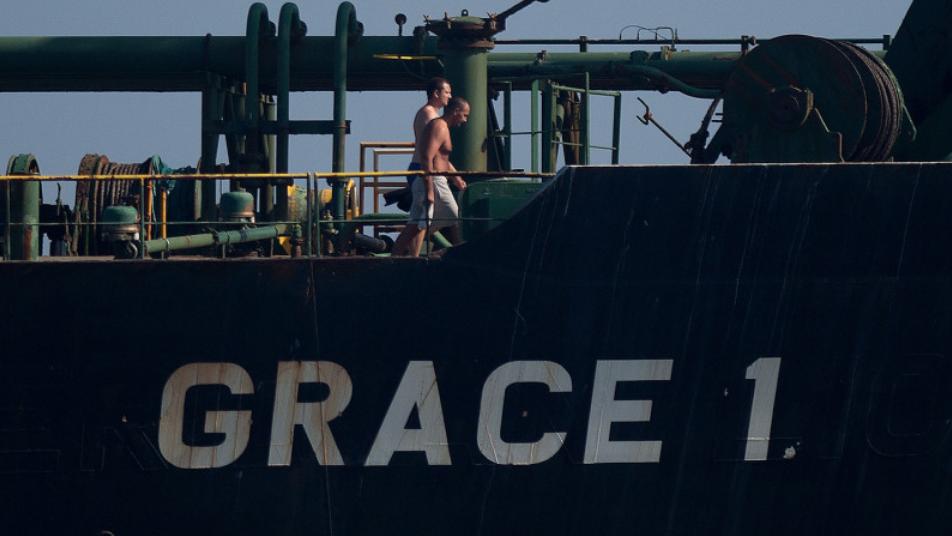 Crew members of Iranian supertanker Grace 1 walk on board off the coast of Gibraltar on August 15. JORGE GUERRERO/AFP/GETTY IMAGES
Orient Net
The Iranian regime's tanker headed through the Mediterranean toward Greece on Monday (August 19) after it was released from detention off Gibraltar, and Tehran said that any at US move to seize the vessel again would have “heavy consequences”.
The Grace 1, renamed the Adrian Darya 1, left anchorage off Gibraltar about 11 p.m. (2100 GMT) on Sunday. Refinitiv ship tracking data showed early on Monday that the vessel was heading to Kalamata in Greece.
The seizure of the tanker by British Royal Marines near Gibraltar in July 4 on suspicion it was carrying oil to Syria in violation of European Union sanctions led to a weeks-long stand-off between Tehran and the West. It also heightened tensions on international oil shipping routes through the Gulf.
Gibraltar, a British overseas territory, lifted the detention order on Thursday but the next day a federal court in Washington issued a warrant for the seizure of the tanker, the oil it carries and nearly $1 million.
Gibraltar said on Sunday it could not comply with that request because it was bound by EU law. Washington wanted to detain the Grace 1 on the grounds that it had links to Iranian regime’s Islamic Revolutionary Guard Corps (IRGC), which it has designated a terrorist organization.
Iranian regime said on Monday any US attempt to seize the tanker would have “heavy consequences”.