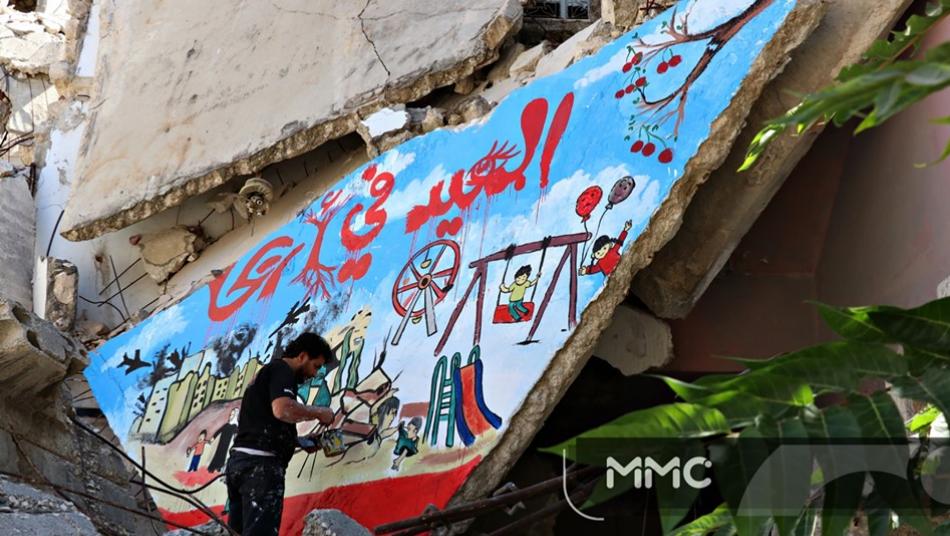 The sign reads: "This is the EId in Idlib's Ariha"
__new_Underarticle_image_EN__
Orient Net
Orient News’ correspondent said officials and community leaders in the town of Kafranbel decided to cancel Eid al-Adha prayers due the to the Assad and Russian heavy bombing in Idlib countryside.
On Sunday (August 11), Syrians and Muslims across the globe are celebrating Eid al-Adha, one of the Islam’s most revered observance.
Eid al-Adha commemorates the Quranic tale of the Prophet Abraham’s willingness to sacrifice his son Ishmael as an act of obedience to God. Before he could carry out the sacrifice, God provided a ram as an offering.
__new_in_first_article1__
Muslims celebrate the Adha, Arabic for “sacrifice,” by slaughtering domestic animals like sheep and distributing the meat to the poor, as a symbol of Abraham’s willingness to sacrifice his only son.
Assad regime did not observe the sacred occasion of Eid al-Adha as its terrorists and militiamen continue attacking civilians in the opposition-held areas during the occasion.
Idlib is within the de-escalation zone deal reached by Turkey and Russia last September. Russian are giving Assad terrorists air cover to continue their ground offensive on the large opposition-held area.