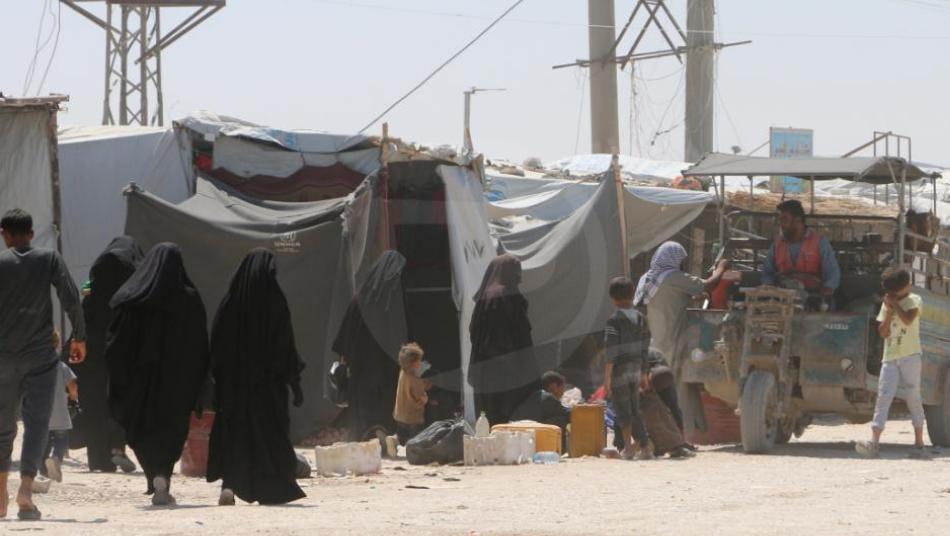 Orient Net
Civilians and relatives of ISIS terrorists in the Hol camp in Hasaka countryside are suffering amid the lack of normal living conditions, local sources and NGO report.
PKK-affiliated Syrian Democratic Forces (SDF) is laying a heavy siege on the camp, preventing people from getting out of the camp or getting inside it.
"Indeed, when we first reached in the Hol Camp, they searched and inspected our belongings, seizing our mobile phones and our papers. I mean I had no way to resort to get news. I was in Hajin  (in Deir ez-Zoor). When the US-led coalition launched its bombing campaign, we the women resorted to camps and my husband was with the "fighters"," a woman used to live inside the camp told Investimate, an NGO which conducts research and studies in Syria.
When she was asked about Internet access, she said: "No, we didn't have access to social media because the network was weak. Before I came they had connection but after we reached in, they blocked the network. They had a satellite way of communication but it was very expensive."
"We used to live in a tent and you could imagine life in tents. It is not a room, it was closed. We suffered from excessive cold weather and we were also sick and we could not find a pill of medicine. Nothing was available,'  the woman who spoke on condition of anonymity continued.
"They are almost non-existent. The lack of services caused diseases. I’m not talking about babies or children who suffered diseases from the polluted water or the atmosphere. Adults almost died while there were no doctors to treat them or give them medicines. They were not allowed to go outside the camp. It was like slow or lingering death. We had polluted water, we cleared it and sometimes boiled it then we waited for it to be cool. There were bad conditions and there were no services. Anyway, thank God. Living among Bedouins was better than living in that camp. We thought that we would receive aid supplies or financial aid from organizations but it turned to be that there was nothing. It was a big tragedy. There was no water or bread or any other basic needs or medicines."
When she was asked about the treatment, she said, "Officials treated us as terrorists as killers of their fathers and family members. They met nothing of our wishes that we demanded. They made noise at night. They sounded horns of their cars and motorbikes. It was a state of horror. We didn’t know where to live. We came to be secured and protected. We thought that we would be protected and provided by aid supplies by organizations. We witnessed nothing of what we heard. There was no security. Indeed we wished to die, they told us that some states would provide you with aid supplies and dollars. But there were mere lies.
The ISIS family members are estimated at 10195, including children and women of about 45 nationalities, a few numbers of ISIS members have been repatriated, while these thousands are left in what is described "The Hell".