Thousands trapped in desert settlement in Syria, near US military base 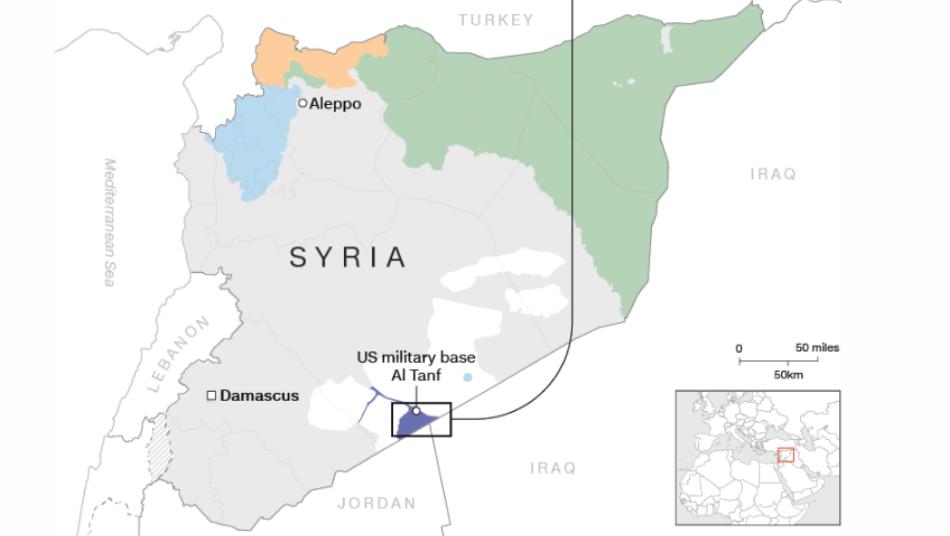 Orient Net - CNN
Shukri Shehab and his wife have not slept in two nights. Their three-week-old granddaughter will not stop crying. She needs simple medicine for bloating, Shehab says, but it is nearly impossible for them to find.
Shehab lives in Rukban, an informal settlement for Syria's displaced people in a US-protected zone in southern Syria, roughly 10 miles away from an American military base. Shehab has been communicating with CNN over the last four months.
For more than 1,200 days, Shehab says he and his family have lived in this cluster of shelters sprinkled along a stretch of desert on the Syrian-Jordanian border. Activists dubbed it the "Triangle of Death." The United Nations called conditions "desperate," "catastrophic" and "no place for a child."
For years, the displaced in Rukban have been at the mercy of proxy powers and political players, leaving them with sporadic access to humanitarian aid and no safe way home. And for the past five months, the Assad regime has blocked humanitarian access to the encampment through its territories.
"No side is taking responsibility for these people," says Aron Lund, a Syria expert and fellow at the Century Foundation, a non-partisan think tank.
A State Department official tells CNN the US is "pursuing every possible avenue to deliver aid to Rukban." But so far Washington has not directly provided aid to the tens of thousands stuck in the settlement, even though the US has protected the area since 2016.
The US has pinned the blame solely on the Assad regime and its Russian allies. Damascus has denied requests for aid deliveries to Rukban since February, pushing instead for civilians to return to regime-controlled areas.
"Rukban is another example of the Assad regime's consistent practice, with Russian support, of facilitating the suffering of its own people while using the situation as a propaganda tool to deflect the blame for its own inhumane behavior," Pentagon spokesperson Cmdr. Sean Robertson told CNN in a statement.
In Syria, aid is delivered either cross-border, with the consent of the neighboring country, or through the UN and other humanitarian groups based in Damascus. But Jordan halted regular cross-border deliveries years ago, leaving only the Assad regime in control of approving UN humanitarian aid convoys to the settlement.
Experts say the US can do more to help. Unlike other areas where the regime has denied or prevented humanitarian access, in Rukban "you have, within the besieged area, a US base and US access. At some point it doesn't really work to say this is (only) the Syrian government's (Assad regime's) fault. Yes, it is, but then what?" says Lund.
The US "could do things for Rukban and they're not doing it. The US could absolutely bring food and especially medicine to Rukban," Lund says.
"There is definitely US culpability in this. Is it only the US? No, absolutely not. But it's a situation where the US has grabbed a piece of Syria and says it is not responsible for the people in that part of Syria, which is wrong."
Trapped in the desert
Most in the settlement fled ISIS, the Assad regime or both, over the course of Syria's conflict. Many were hoping to cross into Jordan, but the country has denied entry since 2016. They wound up in limbo in the desert encampment.
Today, nearly 25,000 are "trapped ... languishing in a wasteland," Paulo Sérgio Pinheiro, Chair of the Independent International Commission of Inquiry on Syria, told the UN Human Rights Council earlier this month, according to Reuters. An estimated 80% are believed to be women and children.
"Me and my family are like everyone else in the camp, just waiting for a kind of solution," says Shehab, who is also a member of the Rukban local council.
They've been waiting so long that his two eldest sons got married in Rukban. His three grandchildren were all born there. The family lives in one shelter with three mud rooms: one for each young couple and their children, and one for Shehab, his wife and three other children.
About a month after ISIS declared its caliphate in June 2014, UN satellite images identified at least 90 makeshift shelters in Rukban. By March 2019, there were nearly 7,800.
Inside Rukban access to drinking water and healthcare is limited. There is no sewage system or formal education. Aid deliveries have always been sporadic, but for the past five months, they have stopped.
"Food, basic medicine, and other life-saving supplies are no longer available," Pinheiro says.
Only two deliveries have reached Rukban since early 2018. Assad regime denied the UN's March 17 request for a third convoy, without citing a reason. The UN made another request on May 9, but the Assad regime has not responded.
When asked earlier this month why the US has not provided aid to fill this gap, US Special Representative for Syria Jim Jeffrey said at the Aspen Security Forum: "If we feed them, it will look like we're going to stay there forever and there may be other options for them."
"We can't commit to a long-term presence in al-Tanf or in any place else in Syria," Jeffrey added.
According to Lund, "the US policy ... in Rukban is not to get involved. If you start feeding these people and taking a governance role toward them ... the presence in Syria that you insist as the US government is not an occupation starts looking more like an occupation."
Elsewhere in Syria, the US has previously pushed to improve living conditions for displaced people. In 2017, former US coalition envoy, Brett McGurk, deployed "experts and diplomats from the State Department and from USAID" to increase humanitarian access for those displaced by fighting against ISIS in the north.
But for a host of political reasons, US policy towards Rukban is unique, shaped by the mission of its base there.
Area is a 'political football'

Rukban's humanitarian crisis is deeply entwined in Syria's fraught geopolitics. The settlement is near the strategic intersection of the Syrian, Jordanian and Iraqi borders, and it is within an area that currently hosts some 200 American troops at a US military base at al-Tanf, considered key to countering Iran's influence in Syria.
"The US presence there was first about anti-ISIS. Now it's about anti-Iran, and the camp is caught in the middle," says Neil Hauer, an independent security analyst.
The US continues to support a local rebel group in and around Rukban, Maghawir al-Thawra, which claims to be fighting ISIS. As recently as July 29, the group posted a video on Twitter of what it called a "successful training" carried out "with coalition forces" to ensure the area "remains safe from Daesh," referring to ISIS.
"The camp's presence makes the entire area another political football in that turning it over to Russia and Damascus is something else the US doesn't want to do, at least for free," says Hauer.
Rukban is also located within a US-Russia "deconfliction zone," meaning Russian and Assad regime-aligned forces are not supposed to enter. Almost by default, this means the two are keen to regain control of the area as battles elsewhere end.
"They see it as a US controlled zone. It's like if Russia occupied part of Texas, then the US would be angry about it," Lund says.
Since the beginning of this year, Moscow appeared determined to deal with Rukban. Assad regime and Russia set up two "humanitarian corridors" in February for civilians to leave.
In March, the Russian Ministry of Foreign Affairs wrote a tweet, later deleted, that read: "We appeal to the entire international community to support the idea of liquidating the Rukban camp, this hotbed of violence, crime..."
More than 17,000 people -- some 42% of the initial 41,700 -- have left since late March, the UN says.
Russia and Assad regime have accused the US of blocking the departure of the rest, with Moscow slamming the US presence in the area as an "occupation." The US has denied these claims.
People are leaving "in part because Russia and the (Assad) Regime are blocking them from access to food and other basic needs," Pentagon spokesperson Cmdr. Sean Robertson says, adding that the displaced "must not be forced to make decisions under threat of starvation or severe deprivation."
Living within the US deconfliction zone has provided de-facto cover from the aerial bombardments, ISIS attacks and arbitrary arrests that have been reported in other areas outside the regime's control, experts and those in Rukban say.
Nearly everyone in Rukban wants to leave, a recent UN survey found.
But "there is a trust issue," says the World Food Program's Marwa Awad, who was in Rukban in February. "People are afraid of coming out because of the process that might unfold afterward."
Many fear arrest if they return to regime areas, according to Shehab. Families worry "about their young guys because there are rumors, they have been conscripted."
'From bad to worse'
Since the last aid convoy reached Rukban, life has gone "from bad to worse," Shehab says.
Shehab's granddaughter's health has improved since those sleepless nights, weeks ago, but he now faces new hurdles. Her mother has been unable to make enough milk for her, putting Shehab on the hunt for one of the settlement's most coveted and rarest commodities: baby formula.
After much effort, Shehab says he secured two boxes for about 30,000 SYP ($60) each.
Food enters Rukban via smuggling routes, and the prices are high but "the most important thing is that it's coming in," Shehab says.
All sides eschew their responsibility by claiming those in Rukban have the choice to leave. But for civilians in Syria, there is very seldom a good way out of their problems.
I will not leave the camp because I refuse to return to the areas controlled by the Assad regime.
In areas previously under Assad siege, the choice given to civilians was surrender or starve. During US-led offensives against ISIS, people could flee or risk becoming collateral damage. In ISIS-held territory the choice was often between allegiance or death.
Shehab has faced these choices before. He fled ISIS and the regime in two cities within a year before arriving in Rukban.
"I will not leave the camp because I refuse to return to the areas controlled by the Assad regime," Shehab says.
"Unfortunately, there is no hope for a solution anytime soon."