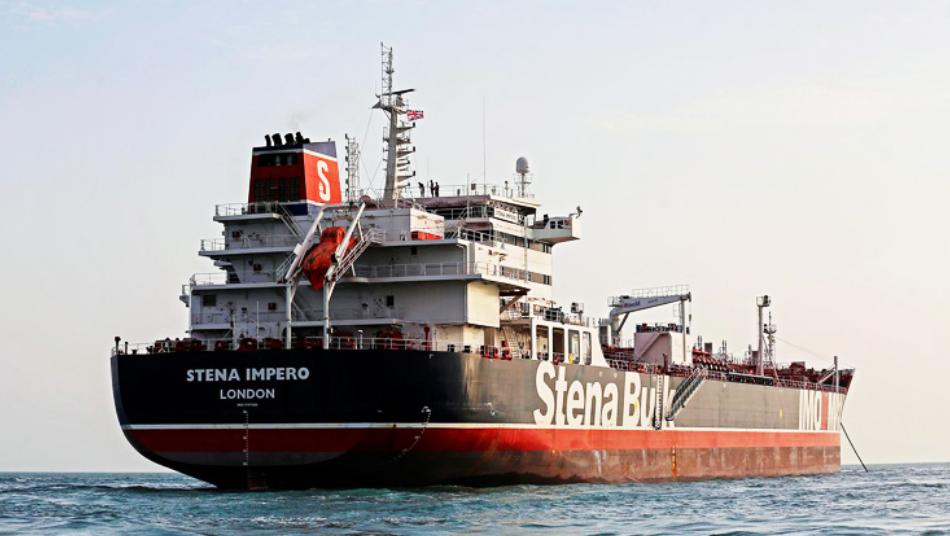 Stena Impero, a British-flagged vessel owned by Stena Bulk, is seen at Bandar Abbas port, Iran. File photo/ Reuters
Orient Net
Iranian regime has freed nine Indian crew members of a Panama-flagged tanker it seized this month, the Indian foreign ministry said on Saturday (July 27), and it appealed for the release of three remaining crew members held from the same ship, Reuters reported.
Dozens of Indian crew members on ships in the Gulf have been caught up in rising tensions between Iran and the West.
The MT Riah was detained by the Iranian coastguard on July 13, with 12 Indian crew members on board, the Indian foreign ministry said.
“Nine crew members have been released and they will be on their way to India soon,” foreign ministry spokesman Raveesh Kumar said.
“Our mission in Iran has requested the concerned Iranian authorities for the release of remaining crew members.”
No reason was provided as to why the three were being held.
Iranian TV aired footage of the vessel a few days after it was seized, saying it had been detained by Iranian regime’s elite Revolutionary Guards for smuggling fuel.
Indian and Iranian authorities said this week Iran had granted India consular access to 18 Indian crew seized on another ship, the British-flagged Stena Impero, that Iran seized in the Strait of Hormuz on July 19.
The seizure of the British tanker in the world’s most important waterway for the oil trade has deepened a crisis between Iran and the West that was triggered in May when the United States tightened sanctions, effectively barring all countries from buying Iranian oil.