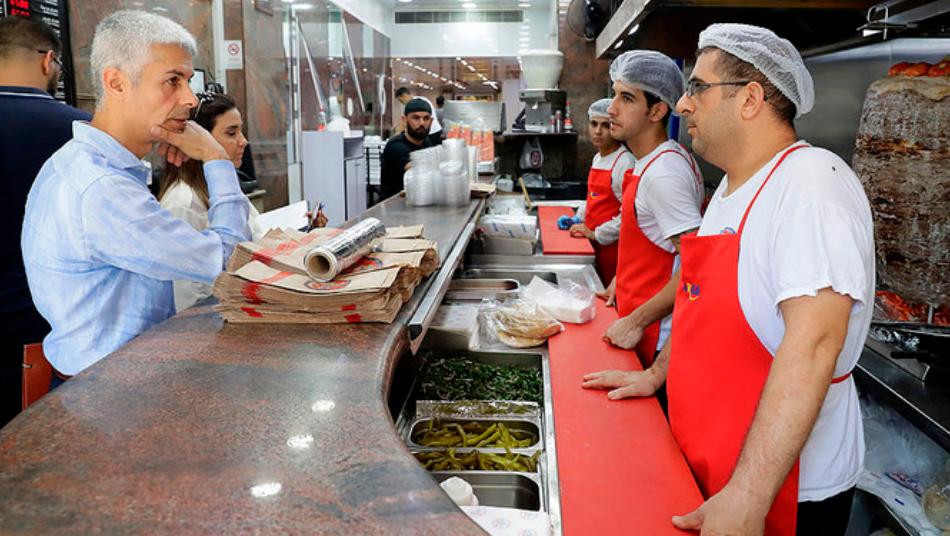 Officials from the Ministry of Labour and the Social Security are pictured at a restaurant in Beirut. (AFP)
Orient Net
In a bustling district of the Lebanese capital, a government inspector issues a fine to the manager of a popular restaurant for hiring 17 Syrian refugees without work permits.
In a country brimming with foreign workers, the labour ministry is clamping down on businesses employing foreigners without the required papers.
But activists have condemned the crackdown, saying it is a pretext to pressure Syrian refugees to return to their war-torn homeland.
After a long argument with the inspectors, restaurant manager Younes Younes reluctantly accepts the $3,300 fine.
“I can’t just replace the Syrian guy who’s been preparing my shawarma sandwiches here for years,” he said.
“Finding Lebanese employees is not easy because they ask for higher salaries,” he told AFP.
“We’ve looked for Lebanese to hire but we haven’t found anyone.”
On a nearby restaurant window in the Hamra neighbourhood, a sign reads: “Lebanese employees wanted.”
“None available,” someone has scribbled over it in red.
Lebanon, a small country of just four million people, says it hosts 1.5 million Syrians — just under 1 million of them registered refugees — as well as other foreign workers.
Across the country, Egyptians fill up cars at petrol stations, Filipinas and Ethiopians clean homes, and Syrians work in restaurants or in the fields.
Due to poor state oversight, employers in Lebanon often hire foreign workers without employment permits, complaining that the process of acquiring one is long and complicated.
Not registering a worker also avoids having to pay social security.
The labour ministry says it is now looking to change this.
It has erected controversial billboards across the country in recent weeks, urging employers to hire citizens.
Last month, it gave business owners a one-month deadline to settle the paperwork of their foreign staff and has started to address violations in recent weeks.
But experts and analysts question the motives behind the latest measures.
“There’s a clear strategy to exert increasing pressure on Syrians” to go back, said Nasser Yassin of the Issam Fares Institute for Public Policy and International Affairs.
Layla, a 20-year-old Syrian hairdresser, said she was forced to leave her job at a Beirut salon along with four Syrian colleagues because they did not have work permits.
“They gave us 48 hours’ notice,” she said.
She too believes that the government’s latest measures are meant to persuade Syrians to return home, but said that this is not likely to happen.
Instead, refugees will likely seek other illegal forms of employment to make a living, she added.
Human Rights Watch and other advocacy groups have accused the Lebanese government of using various methods to put “illegitimate pressure” on Syrian refugees to go home.
“They include ramped up arrests and deportations, closing of shops and confiscation or destruction of unlicensed vehicles,” HRW said.
They came “on top of other longstanding restrictions, including curfews and evictions, and barriers to refugee education, legal residency and work authorisation”, the group said.
Earlier this year, Lebanese authorities gave Syrians living in the eastern region of Arsal until July 1 to demolish shelters made of anything but timber and plastic sheeting.
There has been mounting political pressure for the Syrians to be sent home, with some politicians blaming them for the country’s economic woes.
For more than a year, Beirut has been organising “voluntary” returns.
Last month, Foreign Minister Gebran Bassil called on employers to give priority to Lebanese over foreign labour, including Syrians.
His statement drew criticism from activists who accused him of hate speech, but many in Lebanon have defended the minister.
“We now wish we were refugees in Lebanon,” said Nohad, a 50-year-old housewife.
“Syrians are receiving monthly assistance, free education and healthcare that Lebanese don’t get,” she told AFP.
Marlene Attallah, a labour ministry official, said the latest measures were designed to protect Lebanese jobs.
“There are thousands of Lebanese looking for job opportunities,” she said during an inspection tour.
“The campaign concerns all undocumented foreign workers, and not one particular nationality.”
Yassin, the researcher, acknowledged the “tremendous pressure” Syrian refugees place on the country, but also stressed contribution they made to the economy by renting houses and shops.
The latest measures are unlikely to encourage Syrians to go home, he said.
Instead, “they will probably become poorer, and turn into groups constantly on the run”.
Based on AFP