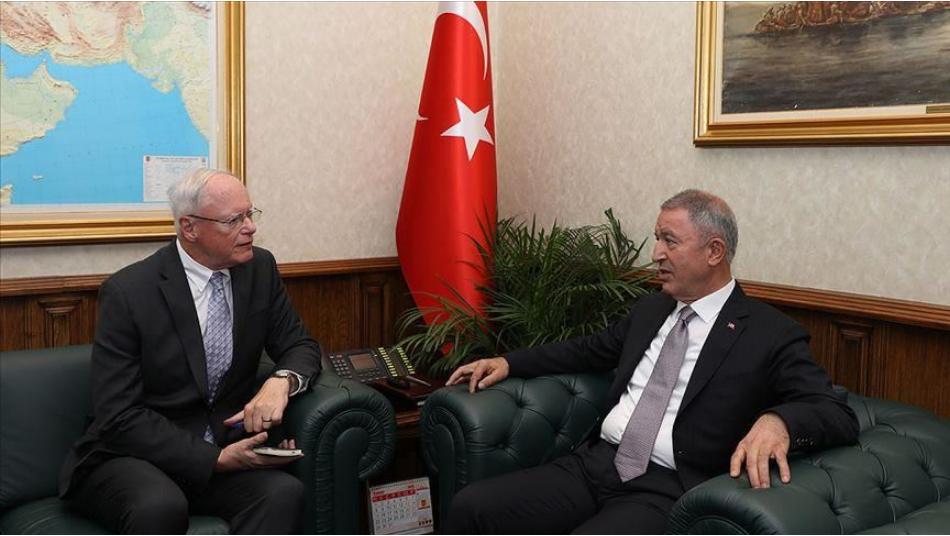 AA photo
Orient Net
The US special envoy for Syria has completed his first day of talks with Turkish officials on Syria, counterterrorism and security, after arriving in Ankara early Monday (July 22), DS reported.
After talks between US and Turkish delegations at the Ministry of Foreign Affairs, James Jeffrey was received by National Defense Minister Hulusi Akar.
Their meeting was dominated by issues such as the safe zone proposal in Syria to be established along Turkey's border, the US' cooperation with the People's Protection Units (YPG) terrorist and allowing safe return for Syrians.
The groups also exchanged views on the situation east of the Euphrates, the presence of PKK-affiliated YPG in the region and are expected to discuss Turkey's exclusion from the F-35 program over Ankara's Russian S-400 missile defense system acquisition.
Following the 3-hour-long meeting, the National Defense Ministry announced that both sides had agreed to continue talks regarding the safe zone to continue between military delegations, and resume the discussion Tuesday at the ministry.
Akar reiterated that Turkey's fight in the region is not against a specific ethno-religious group like Kurds or Arabs but against terrorists of the PKK/YPG and ISIS, and the conditions for Syrian refugees' return must be created.
The ministry also said that Akar had conveyed Turkey's concerns regarding the meeting between high-ranking US officials and YPG terrorists to Ambassador Jeffrey.
Such meetings between PKK/YPG terrorist leaders and U.S. officials, including military officials, irritate Turkey, Akar said, citing a meeting reported today between YPG leader Malum Abdi, US Gen. Kenneth McKenzie, and Ambassador William Roebuck.
Akar also underscored that the PKK/YPG terrorist organization must withdraw from the safe zone completely, as well as all ensure heavy weapons are removed from the region, while the necessary conditions must be created to ensure the safe return of displaced Syrians.
Since 2016, Turkey has conducted two major military operations in northwestern Syria — Operations Euphrates Shield and Olive Branch — to purge the region of terrorist groups, most notably the PKK/YPG, the Syrian branch of the terrorist PKK.