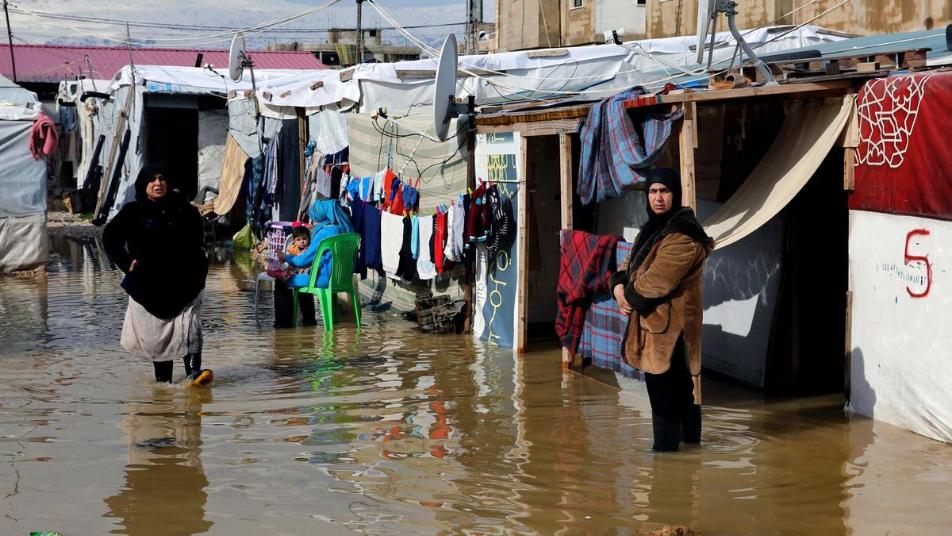 Syrian refugees stand in a pool of mud and rain water at a refugee camp, in the town of Bar Elias, in the Bekaa Valley, Lebanon, Thursday, Jan. 10, 2019. AP
Orient Net
The presence of Syrian refugees in Lebanon aroused controversies and disputes among the country’s political and social components, in parallel with campaigns calling for their return to Syria despite the risks they could face there.
Lebanese and international human rights organizations have warned of the persecution and racial and ethnic discrimination against the displaced, at a time when the Ministry of Labor launched recent measures to crackdown on institutions that employ foreign workers who do not hold a work permit.
As the Russian-Lebanese plan to secure the return of the displaced to their homeland has nearly collapsed due to the complexities of the Syrian situation and the Assad regime’s implicit resistance, the Syrians are facing a multidimensional campaign in Lebanon, mainly led by the Free Patriotic Movement (FPM) and its leader, Foreign Minister Gebran Bassil.
“The phenomenon of the harassment of Syrian refugees in Lebanon is not new, but it is developing progressively in connection with the change in the regional situation in favor of the Assad regime,” said Lawyer Nabil Halabi, director of the Lebanese Institute for Democracy and Human Rights (LIFE).
In comments to Asharq Al-Awsat, Halabi talked about a “siege" imposed on the refugee community in Lebanon, starting with the dismantling of their camps and the demolition of the cement rooms that they have built to protect their children from snowstorms, in addition to depriving them of the right to work.
Reports from international organizations and statements by former Minister for Displaced Affairs Moein al-Merhebi said that dozens of Syrians who had been returned or went back voluntarily to their country were arrested and liquidated by Assad intelligence. The reports were responded by a violent campaign by the FPM and Assad regime allies in Lebanon, accusing Merhebi and humanitarian organizations of inciting the Syrians to remain in Lebanon.
However, the head of the Foreign Workers’ Control Department at the Lebanese Ministry of Labor, Marilyn Atallah, denied the presence of a policy of persecution against Syrian refugees because of the closure of some of the illegal shops they established.
She told Asharq Al-Awsat that the role of the Ministry of Labor was to implement the laws governing foreign labor and to urge anyone who employs foreign workers to attend the ministry to regulate their legal status.
Atallah added that the Minister of Labor Kamil Abu Sleiman “always gives his directives to the ministry’s inspectors to deal with refugees and all foreigners residing in Lebanon, based on humanitarian standards and ethics.”
By Youssef Diab
Link to the original source of Asharq Al-Awsat