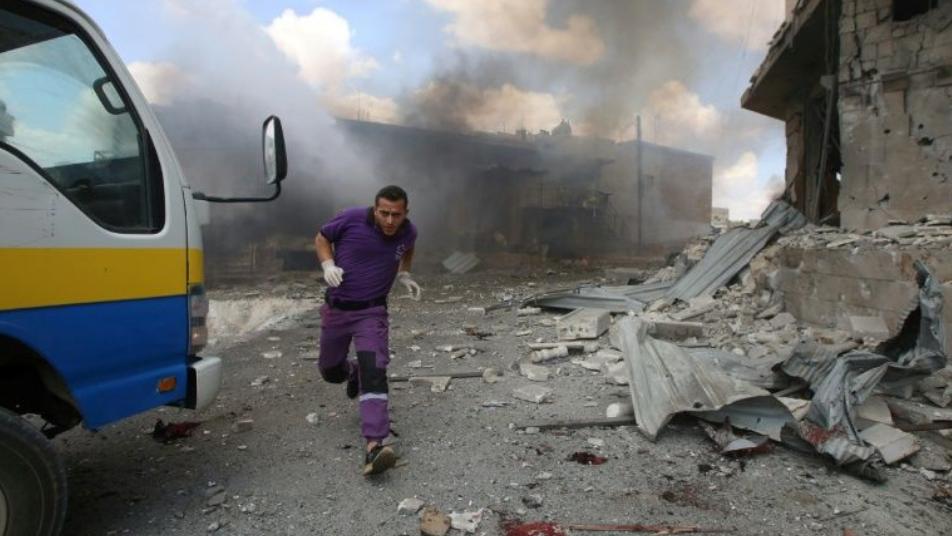 A rescuer from the Violet NGO runs during airstrikes by Assad regime in Maar Shurin on the outskirts of Maarat al-Numan in northwest Syria on July 16, 2019 (AFP Photo/Abdulaziz KETAZ)
__new_Underarticle_image_EN__
Orient Net
Russia on Thursday (July 19) opposed a United Nations Security Council declaration calling for an end to attacks on health facilities in Syria's Idlib region, diplomats said after the latest meeting over violence in Syria’s Idlib.
The outcome led to a rare statement following the meeting by the UN's humanitarian chief, Mark Lowcock.
"The carnage must stop," he said.
Russian and Assad regime aircraft have since late April ramped up deadly bombardment of the Idlib region of about three million people in northwest Syria, despite a deal to avert a massive regime assault.
Last momth, Assad warplanes targeted an ambulance car in Ma'arat al-Nu'man city in Idlib countryside, killing three Violet team volunteers (Saer Bahloul, Mahmoud Mustafa, and Abdul Kader Nahtan) and a woman and injuring three others.
Kuwait, Germany and Belgium asked for the hastily called closed-door session, the latest of many they have sought since May in response to worsening fighting in Syria's northwest.
__new_in_first_article1__
The draft text, given to journalists and which required unanimous backing to be adopted, expressed "grave concern regarding the recent attacks on hospitals and other health facilities."
Those included a July 10 attack on Maarat National Hospital, one of the largest in the area whose coordinates had been shared through the UN "deconfliction mechanism" that aims to spare civilian targets.
Lowcock said after the meeting that since July 1, "at least six health facilities, five schools, three water stations, two bakeries and one ambulance have been damaged or destroyed.
"Entire villages have been destroyed and emptied" because of air strikes, he said.
UN Secretary General Antonio Guterres last week strongly condemned air strikes in the region following reports from a Syrian doctors' group that four health facilities including the Maarat al-Numan facility were hit during a single day of bombing.
Based on AFP