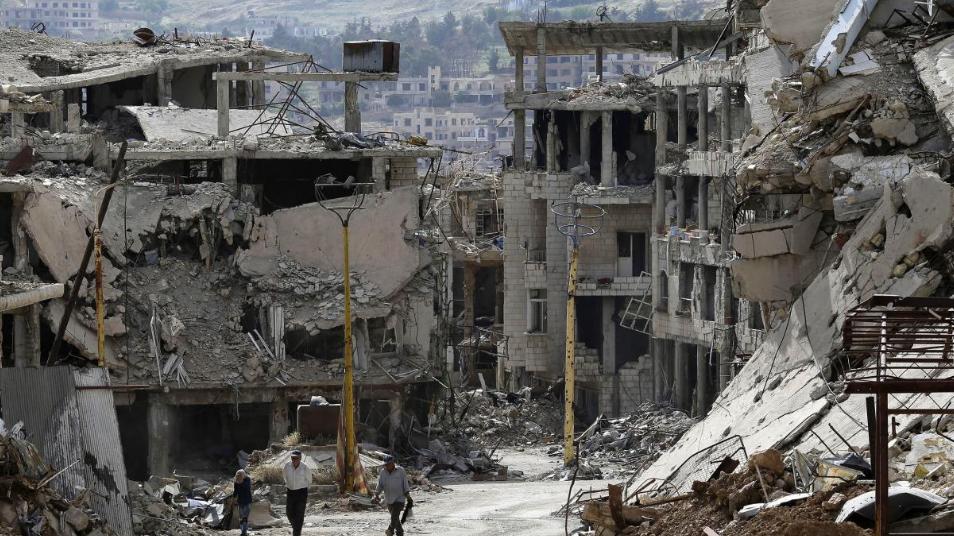 Residents walk through rubble with damaged electricity lines at the mountain resort town of Zabadani in the Damascus countryside, Syria, on May 18, 2017. © 2017 Hassan Amma/AP Photo
Orient Net
The Assad regime is co-opting humanitarian aid and reconstruction assistance, and in places using it to entrench repressive policies, Human Rights Watch said in a report released on Thursday (June 28). Donors and investors should make changes in their aid and investment practices to ensure that any funding they provide to Syria advances Syrians’ rights.
The 91-page report, “Rigging the System: Government (Regime) Policies Co-Opt Aid and Reconstruction Funding in Syria,” looks at the regime’s policies for and restrictions on humanitarian assistance and reconstruction and development funding to Syria. Human Rights Watch found that the Syrian government (Assad regime) has developed a policy and legal framework that allows it to divert aid and reconstruction resources to fund its atrocities, punish those perceived as opponents, and benefit those loyal to it.
“While seemingly benign, the Syrian government’s aid and reconstruction policies are being used to punish perceived opponents and reward its supporters,” said Lama Fakih, acting Middle East director at Human Rights Watch. “The Syrian government’s aid framework undermines human rights, and donors need to ensure they are not complicit in the government’s human rights violations.”
The report is based on 33 interviews with aid workers, donors, experts, and beneficiaries, as well as a review of publicly available data on humanitarian and development assistance and reconstruction. Human Rights Watch has interviewed staff from several major international aid organizations and United Nations agencies operating in regime-held Syria, as well as beneficiaries and former residents of areas in which these organizations operate.
Human Rights Watch found that the Assad regime restricts the access of humanitarian organizations to communities that need or allegedly receive aid, selectively approves aid projects, and imposes requirements to partner with security-vetted local actors. The requirements often mean that the aid is siphoned through the abusive state apparatus, to punish civilian populations it perceives as opponents, and reward those it perceives as loyal or who can serve its interests.
Humanitarian groups operating in Syria who are forced to accede to Assad regime demands may compromise their ability to serve populations in a rights-respecting manner. They have very little leverage to negotiate with the Assad regime.
“In Syria, you barter with the government for projects – everyone knows this,” an aid agency official said. “I say I will rehabilitate schools in this area. The Assad regime comes back and says how about these areas instead? Back and forth, until I commit to their areas to get approval for my projects.”
In some sectors, there is evidence of ongoing and systematic human rights violations. Examples are projects that contribute to or sustain forced displacement, or construction and operation of detention facilities, courts, or law enforcement operations with a record of serious abuse.
The restrictions prevent aid groups from fully addressing human rights concerns through their operations. Assad regime ban independent human rights monitors and restrict the ability of agencies that protect people’s rights to operate, aid workers and executives told Human Rights Watch. They said that if the regime knows their projects include human rights protection the regime will be more restrictive, deny access, and even threaten to revoke staff visas.
United Nations agencies and government bodies that participate in abusive reconstruction efforts risk complicity with the Assad regime’s human rights violations. Individuals and other organizations may also risk criminal complicity by knowingly providing substantial assistance to the commission of international crimes.
Human Rights Watch supports providing reconstruction funding and humanitarian aid to all of Syria, including regime-held areas, and recognizes that the ability of groups that deliver assistant to mitigate some of the risks may be limited. However, there are steps that could be taken to ensure that their work does not contribute to human rights violations.
All aid groups in Syria should avoid contributing to serious human rights abuses including by ending operations where the risks are unavoidable and the likely human rights harm outweighs the benefits of their work.
Investors should conduct due diligence to ensure that they are not funding entities under sanctions for human rights abuses. If they are investing or engaging with agencies that have carried out serious human rights abuses, they should withhold their support until the violations cease, the abusive agencies are reformed, and victims are compensated.
“Without an attempt to reform the system in which they are operating, aid agencies and investors are risking effectively financing the machinery of repression in Syria,” Fakih said. “But with a collective push toward more transparency, due diligence, and access, donors can have greater confidence that their funds are not being used to oppress Syrians.”