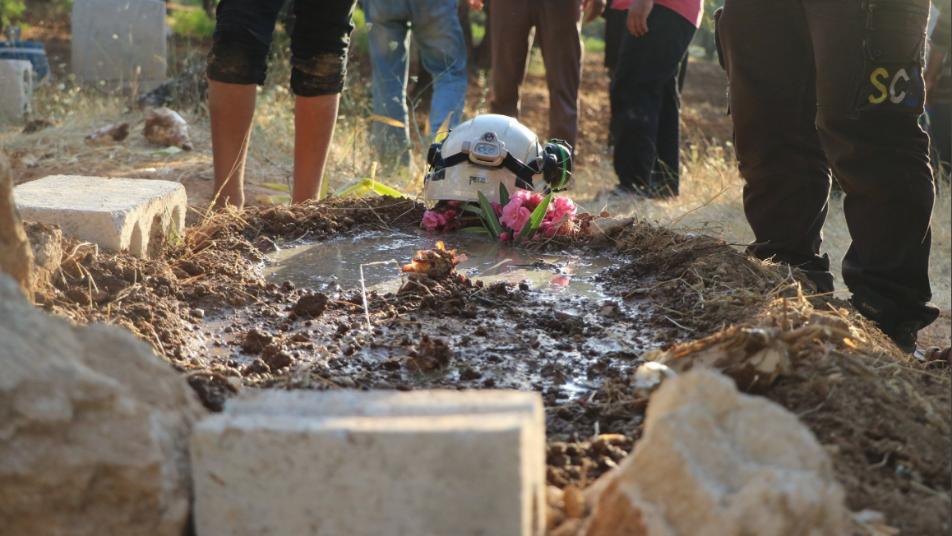 Orient Net
The White Helmets or the Civil Defence rescue group operating in the Syrian opposition areas has published a statement in which it accuses the Russian and the Assad warplanes of deliberately targeting its rescuers. The statement read:
The Syrian (Assad) regime and Russia continue their scorched earth policy against civilians and civilian entities in northwest Syria in violation of international humanitarian law.
Today (June 26) two White Helmets volunteers were killed and five others were injured while responding to an airstrike that hit civilian areas in the town of Khan Sheikhoun in southern Idlib. The rescue operation was deliberately targeted by Syrian regime warplanes, which tracked the rescue workers with the support of Russian forces.
Another warplane deliberately targeted the second ambulance that arrived at the scene, dealing serious injuries to the volunteers inside the ambulance. It took our teams two hours to evacuate the injured volunteers due to the continuous bombing of that area.
__new_in_first_article1__
This comes only a few days after the deliberate targeting of a Violet Organization ambulance which killed three paramedics and injured one civilian and was condemned by the United Nations. These attacks follow a pattern that shows systematic monitoring of ambulances and rescue workers by the Syrian (Assad) regime and Russia, with the aim to maximize civilian suffering by hindering our capacity to respond to airstrikes.
We condemn the deliberate and systematic targeting of civilians and humanitarian workers in the strongest possible terms and demand an immediate investigation into these attacks. The international community must ensure that civilians and civilian infrastructure are protected from bombing and hold accountable the perpetrators of those attacks.
A thorough examination of evidence, such as eyewitnesses and the identification of the munitions used in the attack on the White Helmets' ambulances, have conclusively proven that the aircraft that committed today's crime of targeting and killing our volunteers belonged to the Russian Air Force, which used surveillance aircraft and warplanes that deliberately committed the crime.
As described by both survivors and eyewitness, the first Russian warplane targeted our first responders' team that arrived on the scene following a Russian warplane attack. Moments later another Russian warplane carried out a double tap attack on the rescue team while attempting to pull out the bodies from the first ambulance. The aerial attack by the Russian Air Forces resulted in two martyrs and five severe injuries among the White Helmets.
This by no mean discharges the regime from the crime of bombing civilian houses in the first place, which has endangered our volunteers during their response to the crime.
قيم هذا المقال 4 0