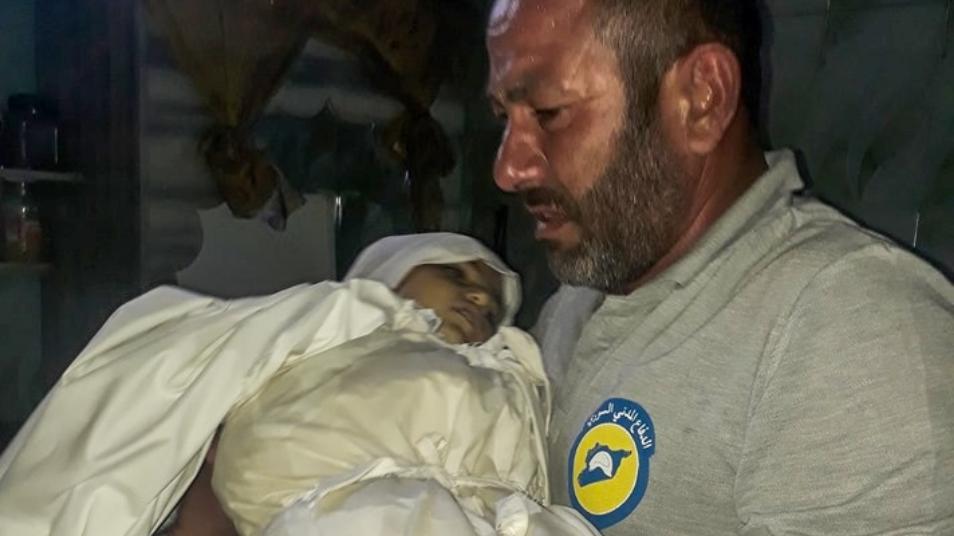 Orient Net
Assad and Russian warplanes targeted on Thursday (June 21) Idlib countryside, killing at least 23 civilians, including nine children and three rescuers and injuring 27 civilians.
Assad warplanes targeted Hish town, killing at least six civilians, including two baby sisters and injuring others.
Jinan al-Shawwa, a five-years-old girl along with her baby sister Raghad and their brother Abdul Razzaq were buying ice cream from a shop in the popular market in Hish town when Assad warplanes bombed the market, killing the two sisters and injuring their brother.
Their Uncle Khaled, a White Helmet volunteer, was on duty while the attack happened, unfortunately he could not save his nieces.
Little Jinan and her sister used to listen passionately to their Uncle telling them stories about how he and his friends save children.
Khaled was seen, carrying Jinan, full of sorrow as he could not save his beloved little nieces from Assad criminal attacks.
Most of the families have fled Hish due to Assad and Russian sever bombardment. However, very few families, including Jinan's family are still there because they do not have a place to go to and do not have enough money to leave.