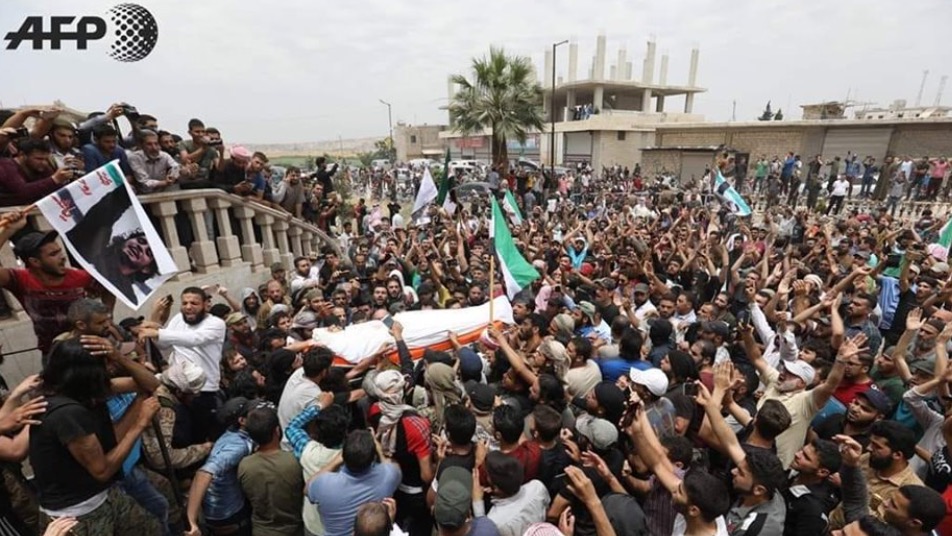 Orient Net - Ahmad al-Shehabi
The Syrian revolution’s goalkeeper and singer Abdul Baset al-Sarout was laid to rest in Idlib’s al-Dana on Sunday (June 9).
The body of al-Sarout was brought from Hatay province in Turkey through Bab al-Hawa crossing earlier on Sunday as he was already taken to be treated from the serious injury he suffered.
Thousands of Syrians bid farewell to the al-Sarout’s body in Turkey as he was carried into Syria’s Idlib to be laid to rest.
The funeral prayers were held in the city of al-Dana in Idlib northern countryside where dozens of thousands of Syrians took part in what they called the "solemn" event.
The absentee prayers were held in many cities, including Istanbul and Gaziantep and cities of the opposition-held areas in Syria.
Syrians wore and carried the flag of the Syrian revolution to show solidarity and faith to the principles and values in which al-Sarout believed and died for.
Abdul Baset al-Sarout succumbed to the wounds he suffered by the Assad militias on Thursday (June 7) during the fierce battles against the regime and its sectarian militias in Hama northern countryside.