Syrians protest against Assad-Russian bombing on Idlib near Turkey border

Syrians protest against Assad-Russian bombing on Idlib near Turkey border 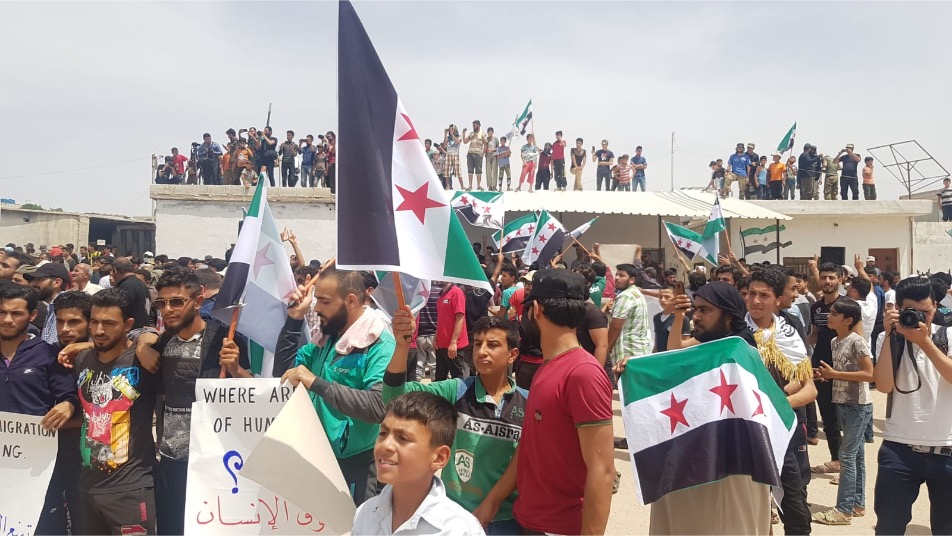 Orient Net
Thousands of Syrians rallied on Friday (May 31) to protest against the Assad and Russian bombing campaign in Idlib, Hama northern countryside and Aleppo province, groups of Syrian activists reported.
The protesters gathered near Atmeh crossing area, chanting slogans against Bashar Assad and Vladimir Putin, and calling on the Turkish guarantor to use its influence to halt the bombing campaign on civilians. The protesters warned against what they called an unprecedented wave of refugees which could invade Europe if the bombing on Idlib never halts.
“Putin & Assad are refugees makers!!! If bombing in Idlib doesn’t halt, millions of refugees are coming to Europe. We don’t want to be refugees, we like Syria, help us stay here. We don’t deny the Holocaust, so do something to stop our Holocaust! We prefer death to Assad rule. Assad displaced Syrian protesters to Idlib from all the country. Assad kills children! Western powers, if you don’t stop Assad bombing, the largest wave of refugees will invade Europe,” were among the placards they wrote.
“We don’t want to break the Turkish border, our goal of this rally is to send a very strong message to the whole world and tell them; if we decide to act, we act. Our children and women are being killed by the regime and Russian warplanes in cold blood,” Dulama Ali, an organizer of the rally said.
It is worth mentioning that Russia and Turkey reached a de-escalation deal last September but Assad and Russian warplanes have breached the de-escalation deal, killing and injuring thousands of civilians. The bombing campaign has also displaced more than 180.000 civilians, according to the United Nations. Locals put the number at 500.000.