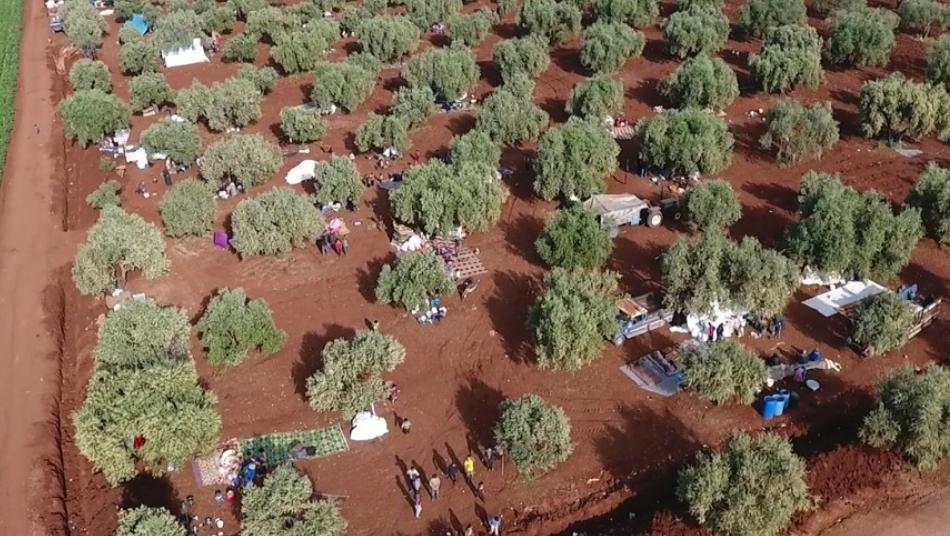 Syrian IDPs taking refuge in olives orchids near the town of Atmeh, in northern Idlib, Syria, on Thursday, May 9, 2019. THIQA NEWS AGENCY/AP
Orient Net
UN-linked aid groups have suspended activities in parts of violence-plagued northwest Syria, where stepped up bombardment by the Assad regime and Russia is jeopardising the safety of humanitarian workers, AFP reported.
"As of 8 May, at least 16 humanitarian partners have suspended their operations in areas impacted by conflict," the UN Office for the Coordination of Humanitarian Affairs, or OCHA said Friday (May 10).
The World Food Programme said it has suspended deliveries to about 47,000 people in towns and villages that have come under bombardment.
The uptick in air strikes and shelling on Idlib and Hama has displaced 180,000 people between 29 April and 9 May, OCHA said.
It has also affected 15 health facilities and 16 schools, it added.
"Some organisations suspended activities as their premises were damaged, destroyed or rendered unsafe by the violence," OCHA said.
"Others have suspended activities in order to keep their staff and beneficiaries safe, or because the beneficiary population has left," it added.
OCHA said five humanitarian workers, including two health professionals, have been reportedly killed due to air strikes and shelling.
WFP also said that some of its partners inside Idlib have been "displaced due to the violence, while a few others have sustained injuries".