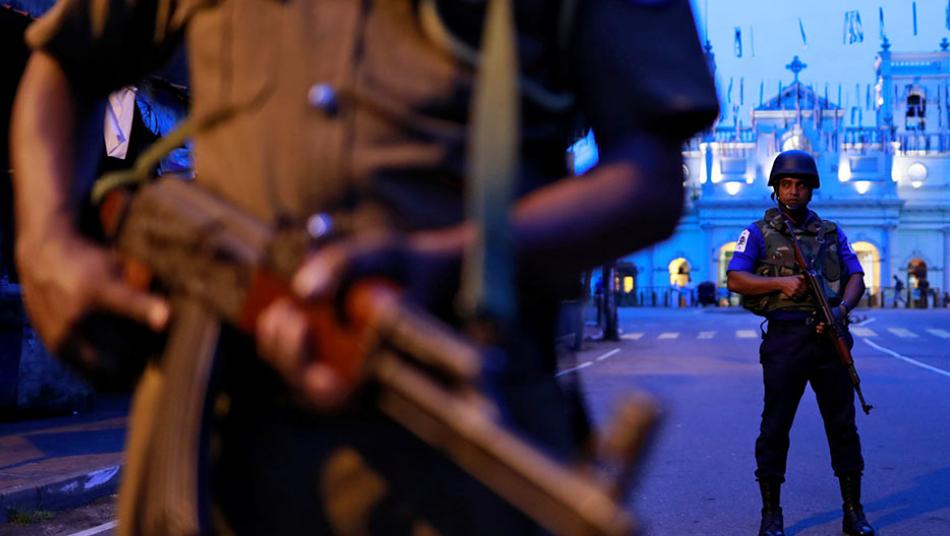 Priests are seen in the background as security personnel stand guard Monday in front of St Anthony's Shrine in Colombo, site of one of the attacks on Easter Sunday. Danish Siddiqui/Reuters
Orient Net
Sri Lanka’s Catholic churches have canceled Sunday mass in the capital Colombo for a second straight week, citing foreign intelligence warnings of threats to worshippers in the wake of the deadly Easter bombings on churches and hotels, Reuters reported.
Sri Lankan security forces have said they were maintaining a high level of alert as intelligence reports indicated the militants were likely to strike before the beginning of the Islamic holy month of Ramadan, which is due to begin on Monday.
And the US ambassador to Sri Lanka said this week that some of the Islamist militants behind the Easter bombings that killed over 250 people were likely to be still at large and could be planning more attacks.
“The security situation has not improved yet,” Colombo Archdiocese spokesman Edmund Tillekeratne said on Friday (May 3).
Schools are due to reopen again on Monday, and the Education Ministry has said at least one police officer will be posted at each institution to protect children.
ISIS has claimed responsibility for the coordinated bombings in Sri Lanka, but has not give evidence for its claim.