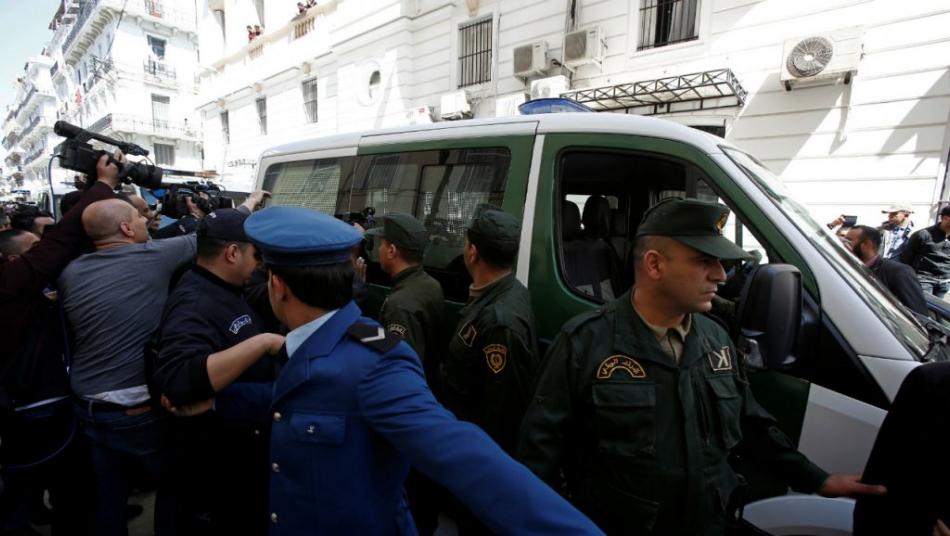 Ramzi Boudina, REUTERS | Media and police surround a convoy of police vehicles as businessmen suspected of corruption are driven to court in Algiers on April 23, 2019
Orient Net
Algerian authorities are embarking on a "Clean Hands" campaign aimed at rooting out corruption that has been linked to top tycoons and current and former government officials, including close allies of ousted leader Abdelaziz Bouteflika, France 24 reported.
Corruption is a major complaint of the masses of protesters who helped drive Algeria’s longtime president from office earlier this month. New protests are scheduled for Friday (April 26).
Several influential Algerians have been questioned or arrested in recent days. Among them is Issad Rebrab, head of Algeria's biggest private conglomerate Cevital, who is suspected of possible customs-related violations and other financial wrongdoing, according to prosecutors.
Rebrab, 75, is estimated by Forbes to be Algeria's richest man and employs 18,000 workers in his agribusiness empire. He was questioned for six hours before being taken to the El Harrach prison.
The Cevital chairman had backed the anti-Bouteflika protests that ultimately forced the president's April 2 resignation, and his company said it was "astonished" by his arrest.
Others targeted include a legislator accused of accepting bribes from a Chinese company.
Also detained for questioning this week were three wealthy brothers believed close to Bouteflika's brother Said, and seven Industry Ministry officials suspected of "non-respect of contractual commitments with state enterprises" and influence trading.
The highest court in Algeria announced in a statement Wednesday that it is considering a case against ex-energy minister Chakib Khelil for acts related to "violations of foreign exchange laws and transfers of capital to foreigners".
The development came one day after the head of Sonatrach, Abdelmoumen Ould Kaddour, was fired and replaced on the orders of the country's interim president Abdelkader Bensalah.