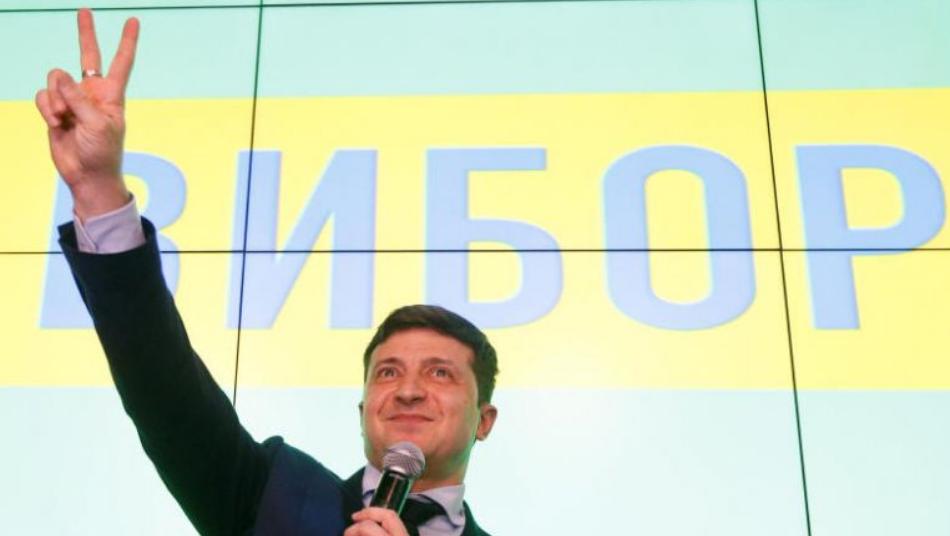 Ukrainian comic actor and presidential candidate Volodymyr Zelenskiy flashes a victory sign following the announcement of the first exit poll in a presidential election at his campaign headquarters in Kiev, Ukraine, on March 31, 2019. PHOTO: REUTERS
Orient Net
A comedian with no political experience raced ahead in the first round of Ukraine’s presidential election on Sunday (March 31), offering a fresh face to voters fed up with entrenched corruption in a country on the frontline of the West’s standoff with Russia, Reuters reported.
With over half of all ballots counted by Monday morning, 41-year-old Volodymyr Zelenskiy, who plays a fictional president in a popular TV series, held a comfortable lead over incumbent President Petro Poroshenko in a vote deemed largely free and fair by the national electoral commission.
A crowded field of 39 candidates has now shrunk to just two, with Zelenskiy and Poroshenko set to go head-to-head in a second round run-off on April 21.
Propelled by his anti-establishment appeal, newcomer Zelenskiy must convince voters he is fit to lead a country that has been at war ever since protests in 2014 ejected a pro-Kremlin government and Russia annexed the Crimean peninsula.
He has been criticized for being an unknown quantity and light on policy detail, and his victory speech on Sunday provided little further insight into what he would do if handed the top job in the second round vote.
Both Zelenskiy and Poroshenko face firmly west, and neither wants to move Ukraine back into Russia’s orbit. But investors are also keen to see if the next president would push reforms required to keep the country in an International Monetary Fund bailout program that has supported Ukraine through war, sharp recession and a currency plunge.