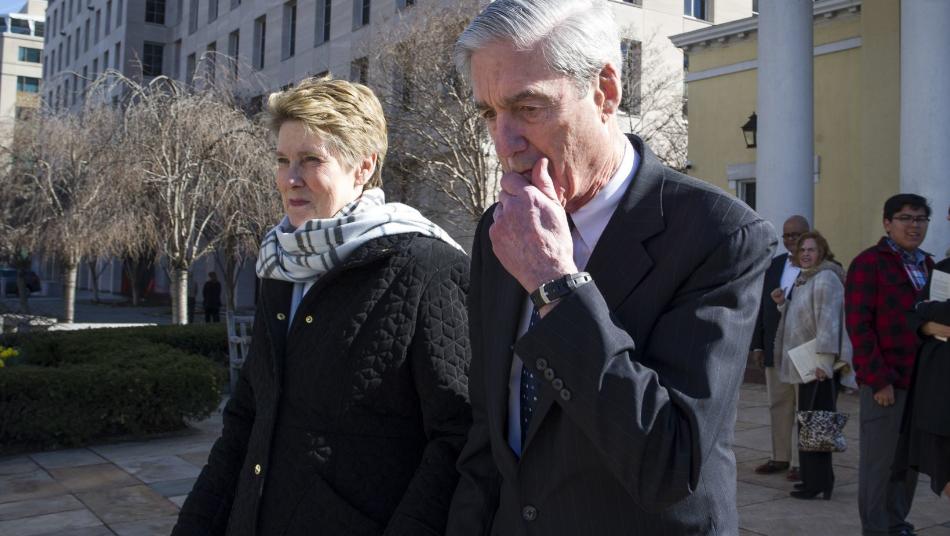 Special Counsel Robert Mueller, and his wife, Ann, leaving St. John's Episcopal Church, across from the White House, in Washington on Sunday. (AP Photo/Cliff Owen)
Orient Net
Special Counsel Robert Mueller found no evidence of collusion between US President Donald Trump’s campaign and Russia in the 2016 election, but left unresolved the issue of whether Trump obstructed justice by undermining the investigations that have dogged his presidency, Reuters reported.
Even though Mueller’s findings on obstruction of justice were inconclusive, US Attorney General William Barr said in a summary released on Sunday (March 24) that Mueller’s team had not found enough proof to warrant bringing charges against Trump.
It marked a political victory for Trump. He quickly claimed “complete and total exoneration” while his Democratic opponents expressed dissatisfaction with the outcome and vowed to continue congressional probes into his business and personal dealings.
Mueller’s 22-month investigation ended with a finding that no one in Trump’s campaign “conspired or coordinated with the Russian government,” according to Barr’s four-page summary of Mueller’s confidential report.
US Senate Intelligence Committee Chairman Richard Burr, a Republican, said Barr should release as much of Mueller’s report as possible.
It remained unclear, however, how much more would be made public.
Mueller formally ended his investigation on Friday after bringing charges against 34 people, including Russian agents and former key allies of Trump, such as his campaign chairman Paul Manafort, former national security adviser Mike Flynn and his personal lawyer Michael Cohen.