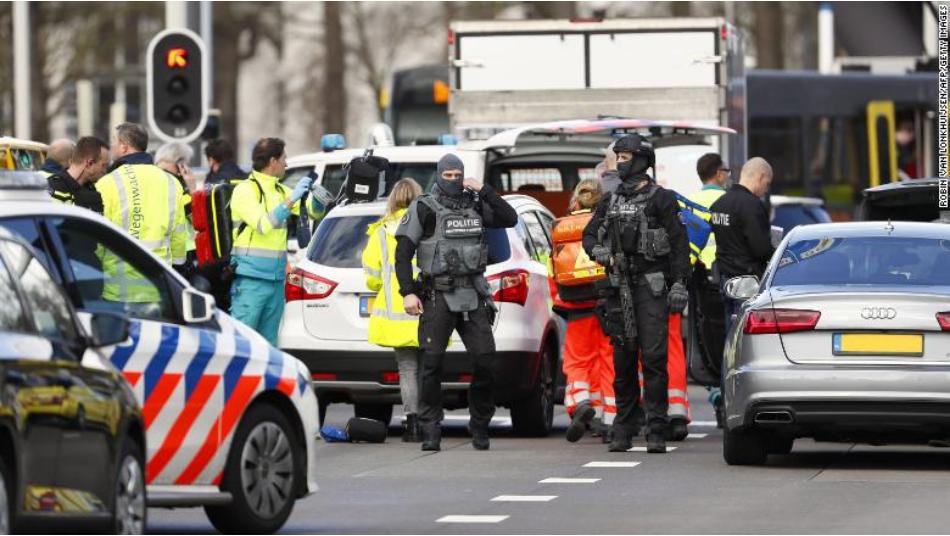 Police officers at the scene of a shooting on a tram in Utrecht's 24 October Square.
One person was feared dead and several suffered gunshot wounds on Monday (March 18) in a tram in the central Dutch city of Utrecht and a hunt was underway for the gunman in an incident authorities said appeared to be a terrorist attack, Reuters reported.
Dutch broadcaster NOS said police had surrounded a building where the suspected gunman was believed to be holed up. There was no immediate word on who the gunman was or on the precise number or identity of the victims.
Authorities raised the terrorism threat to its highest level in Utrecht province, schools were told to shut their doors and paramilitary police increased security at airports and other vital infrastructure. Security was also stepped up at mosques.
__new_in_first_article1__
“Several shots were fired in a tram and several people were injured. Helicopters are at the scene and no arrests have been made,” said police spokesman Joost Lanshage. He was not immediately able to provide further details.
Local broadcaster RTV Utrecht quoted a witness as saying he had seen a woman lying on the ground amid some kind of confrontation and several men ran away from the scene.
A reporter for NOS said a white sheet had been placed over a body near the tram where the shooting had taken place.
Utrecht police said the tram station stop in a square outside the city centre had been cordoned off. Emergency services were at the scene.
قيم هذا المقال 17 0