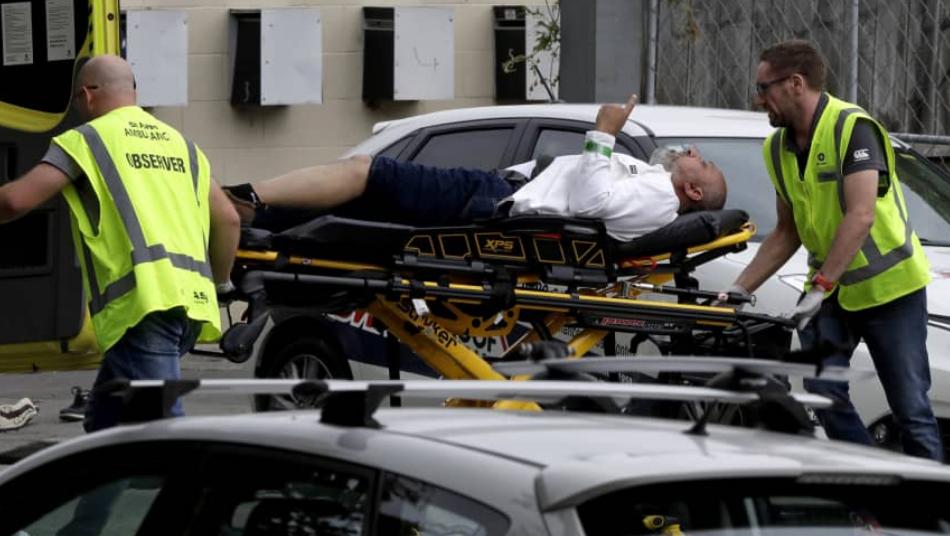 Paramedics help a man outside a mosque in central Christchurch, New Zealand, on Friday. | AP
Orient Net
At least one gunman killed 40 people and wounded more than 20 during Friday prayers at two New Zealand mosques in the country’s worst ever mass shooting, which Prime Minister Jacinda Ardern described as terrorism, Reuters reported.
New Zealand was placed on its highest security threat level, Ardern said, adding that four people in police custody, three men and one woman, held extremist views but had not been on any police watch lists.
The visiting Bangladesh cricket team was arriving for prayers at one of the mosques when the shooting started but all members were safe, a team coach told Reuters.
The killings in the city of Christchurch were condemned by political and Islamic leaders across Asia.
“We believe that 40 people have lost their lives in this act of extreme violence,” Ardern said. “It is clear that this can now only be described as a terrorist attack.”
Video footage widely circulated on social media, apparently taken by a gunman and posted online live as the attack unfolded, showed him driving to one mosque, entering it and shooting randomly at people inside.
Worshippers, possibly dead or wounded, lay huddled on the floor, the video showed.
One man who said he was at the Al Noor mosque told media the gunman was white, blond and wearing a helmet and a bulletproof vest. The man burst into the mosque as worshippers were kneeling for prayers.
“He had a big gun ... he came and started shooting everyone in the mosque, everywhere,” said the man, Ahmad Al-Mahmoud. He said he and others escaped by breaking through a glass door.
Radio New Zealand quoted a witness inside the mosque saying he heard shots fired and at least four people were lying on the ground and “there was blood everywhere”.
Muslims account for just over 1 percent of New Zealand’s population, a 2013 census showed.