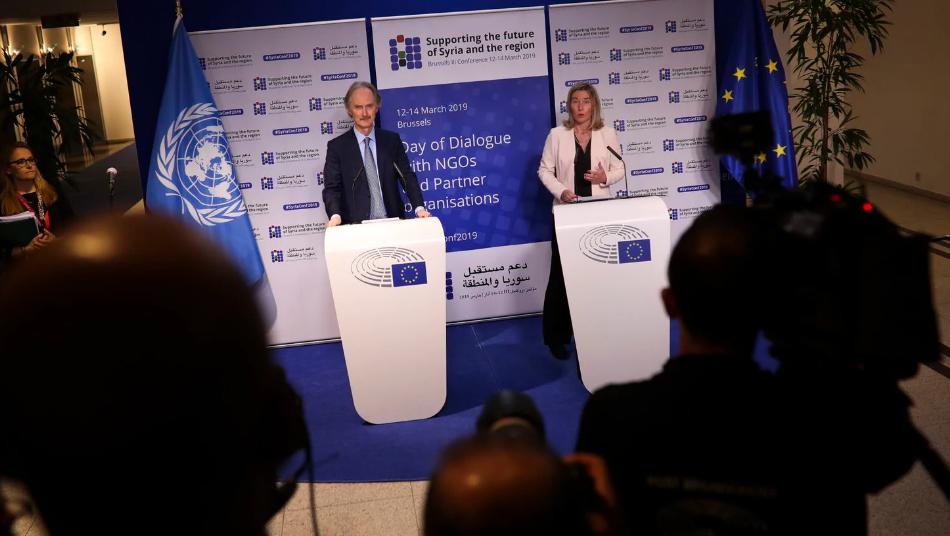 European Union foreign policy chief Federica Mogherini and UN Syria envoy Geir Pedersen talk to journalists at the European Parliament on the eve of the Syria donors conference, in Brussels, Wednesday, March 13, 2019. (Francisco Seco/AP)
Orient Net - Agencies
Representatives from many countries and international organizations gathered Thursday (March 14) in an effort to drum up aid for Syria amid growing donor fatigue.
“Syria remains one of the great crises of our time,” UN humanitarian chief Mark Lowcock said as the pledging conference opened in Brussels. He expressed deep concern about the threat of open conflict in Syria’s northern Idlib province, where more than 90 people were killed last month, nearly half of them children.
“A large-scale military assault on Idlib would create the worst humanitarian catastrophe the world has seen in the 21st Century,” Lowcock said.
The UN says $3.3 billion is needed to help meet Syria’s own aid needs this year, plus a further $5.5 billion to support neighboring countries where most Syrians are seeking refuge.
About 11.7 million Syrians still depend on aid and more than 6 million of them have been forced from their homes but remain in the country.
“If we get close to, or even a bit better than, the 6 billion dollars that we raised last year for our appeals, then that will be a good day,” Lowcock told the representatives of around 55 countries and 80 delegations expected to attend.
The European Union announced that it would provide 560 million euros ($633 million) this year, while planning to offer the same amount next year and in 2021.