After ISIS: what happens to the foreign nationals who went to Syria? 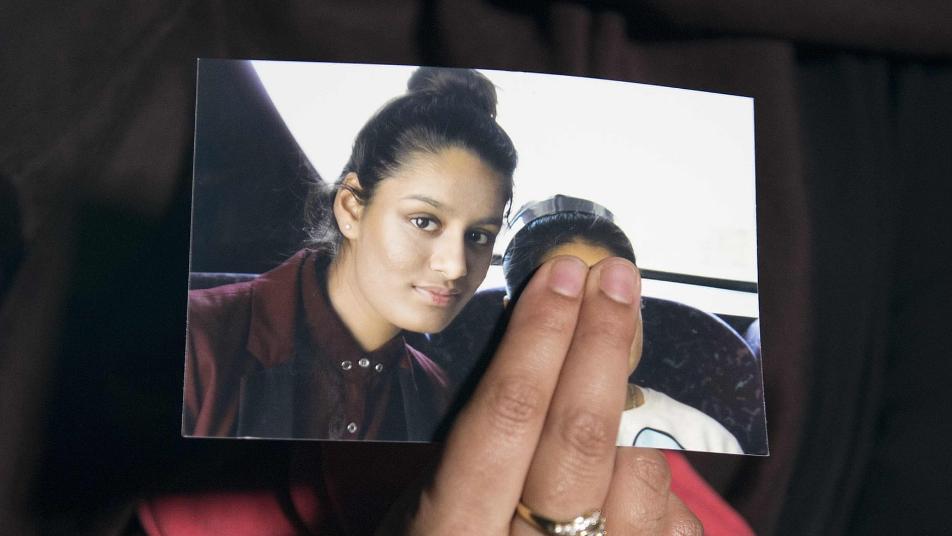 A picture of Shamima Begum before she left east London in 2015 with two friends to join ISIS. Photograph: Laura Lean/AFP/Getty Images
Orient Net - The Guardian
US-backed Kurdish militias in Syria have almost completely dismantled Islamic State’s once sprawling “caliphate”, with Isis fighters making their last stand in an area smaller than one sq km in the eastern desert near the border with Iraq.
Wives and children of the militants, along with thousands of civilians unconnected to the group, have fled, some making for al-Hawl refugee camp, where dozens of people, mostly children, have died in squalid and freezing conditions in recent weeks.
Among those who fled to the relative safety of the camp is British teenager Shamima Begum, who left her home in east London with two friends to join Isis in 2015. Begum, now 19 and pregnant, is unrepentant about travelling to Syria, but has asked to be allowed to come home for the sake of her unborn child, raising the question: what happens after the militants’ defeat to those who joined them?
Remaining foreign fighters
About 500 battle-hardened fighters are thought to be defending the remains of the caliphate and most are highly motivated foreign nationals who are ideologically committed to fighting until the end. Most local Isis recruits from Syria and Iraq are believed to have slipped back into the general population.
At least 1,000 foreign nationals, including at least 14 British citizens, suspected of being ISIS members are held in prisons and camps in north Syria, having been captured by the Kurdish-led Syrian Democratic Forces (SDF) over the last three years.
Women and children
About 1,500 with links to the group are being held at displacement camps, often in appalling conditions. They are from more than 40 countries and some have been held for at least two years.
At al-Hawl camp in Deir ez-Zor province, more than 39,000 people face a lack of electricity, food and water. The International Rescue Committee said on Wednesday that 51 people, mostly children, have died in recent weeks owing to freezing weather, malnutrition and a lack of medical care.
The fate of British nationals
The SDF, which is holding ISIS suspects, is a major western ally but a non-state actor. The UK government has made clear that since it does not have diplomatic staff in Syria British consular assistance is very limited.
Some governments, including the US and Russia, have repatriated men, women and children for trial or rehabilitation programmes.
The Guardian understands from diplomatic sources that as of last week there has been no change in the UK position.
Legal and ethical considerations
While the security minister, Ben Wallace, said on Thursday he would not put officials’ lives at risk to rescue UK citizens who joined the militants, saying “actions have consequences”, there has been heated debate about the fate of returning foreign fighters – not least those who may have been non-combatants like Begum.
Max Hill, until last autumn the UK’s independent reviewer of terrorism legislation, was among those to argue that Britain should rehabilitate, rather than prosecute some British citizens who were coerced to join Isis or who travelled to Syria and Iraq through “naivety”. At the other end of the spectrum, however, is the view of those like the defence secretary, Gavin Williamson, who has said British Isis recruits should be hunted down and killed.
Katherine Brown, a University of Birmingham academic who has given evidence in cases of women and girls involved in terrorism cases, told the Guardian that a middle ground needs to be found.
“First we need to recognise that yes, [Shamima Begum] was a minor when she travelled to Syria. There also has to be an acknowledgement of the fact that she made an active choice, but that should not diminish from the UK’s obligations in terms of rule of law and human rights.
“We do not have a revenge-based justice system and in the process of justice we need to consider rehabilitation, not least in the light of successful examples of exit programmes, for instance for women who have left [the Nigerian Islamist group] Boko Haram.”
Brown’s view was echoed by the human rights lawyer Philippe Sands who said ISIS recruits who wanted to return to the UK should be treated case-by-case and in a way that took into account how they were first recruited, particularly if they were minors at the time.
“We have a responsibility as a society to give her [Begum] a chance – with her cooperation – to explore the possibility of rehabilitation while recognising that if she has committed criminal acts the law must take its course. What is not right is to just leave her where she is.”
The options if the UK stance does not change
The SDF has repeatedly called on its western partners to take their citizens back, stressing it does not have the resources to detain them indefinitely.
Repatriation has been further complicated by the US decision to withdraw troops from Kurdish-held parts in Syria in the next few months. The exit could lead to fresh fighting between the Kurds and neighbouring Turkey, or force the Kurds to ally again with Assad regime.
If the Kurdish leadership opts to reconcile with Damascus it is possible Isis suspects could then be handed over to Assad regime.
By Bethan McKernan and Peter Beaumont