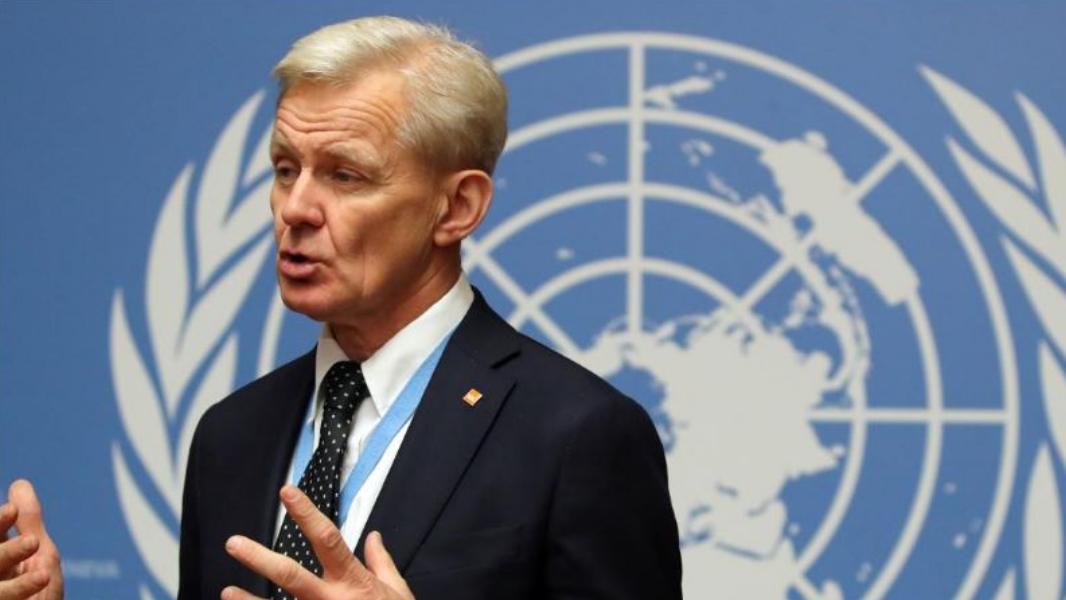 Jan Egeland, UN senior advisor of the Special Envoy for Syria gives an interview to Reuters in Geneva, Switzerland, November 29, 2018. REUTERS/Denis Balibouse
Governments must never again use fighting terrorism as a pretext to flatten cities and stoke war as they did in Syria, Jan Egeland told Reuters on Thursday (Nov. 29) as he stepped down from his role as the UN humanitarian adviser on Syria.
The war should never have been allowed to spiral out of control, but after the missed peace plan opportunity of Kofi Annan in 2012, the war worsened and the belligerents blamed “terrorism” for tactics that broke the rules of war, he said.
“Too many said that since we’re fighting terrorists we are allowed to smash the whole place – to me that is a violation of every humanitarian principle,” Egeland said. “The war on terror needs to be reexamined.”
Branding all opponents as terrorists made it harder to negotiate, to do humanitarian work and to protect civilians. But Russia, the United States, Turkey, the Gulf countries, Iran and Israel all claimed to be fighting terrorism, Egeland said.
“They are in some sort of a power play and many of them seem then to think they do not need to follow humanitarian law of armed conflict as they would in normal cases because they are fighting such despicable terrorists.”
Syrian cities had been leveled like the World War Two battlegrounds of Dresden and Stalingrad. But a widow with five children in Idlib should not be killed just because “terrorists” had moved in next door, he said.
“She should be helped.”
__new_in_first_article1__
Egeland said although humanitarian workers had managed a huge aid operation, they had failed to shield civilians.
“There has to be an understanding that, listen, we played with a powder keg here, it went off, the civilians paid an enormous price, we learn from this now and we work together to build reconciliation.”
The people who did the killing should be not escape justice, but they all had sponsors, Egeland said.
“There was never a lack of arms, never a lack of military supplies, never a lack of cheerleaders on either side.”
The seven years of war, in which hundreds of thousands have died, has been accompanied by a faltering UN peace process that has achieved nothing despite having unanimous support from the UN Security Council.
Based on Reuters