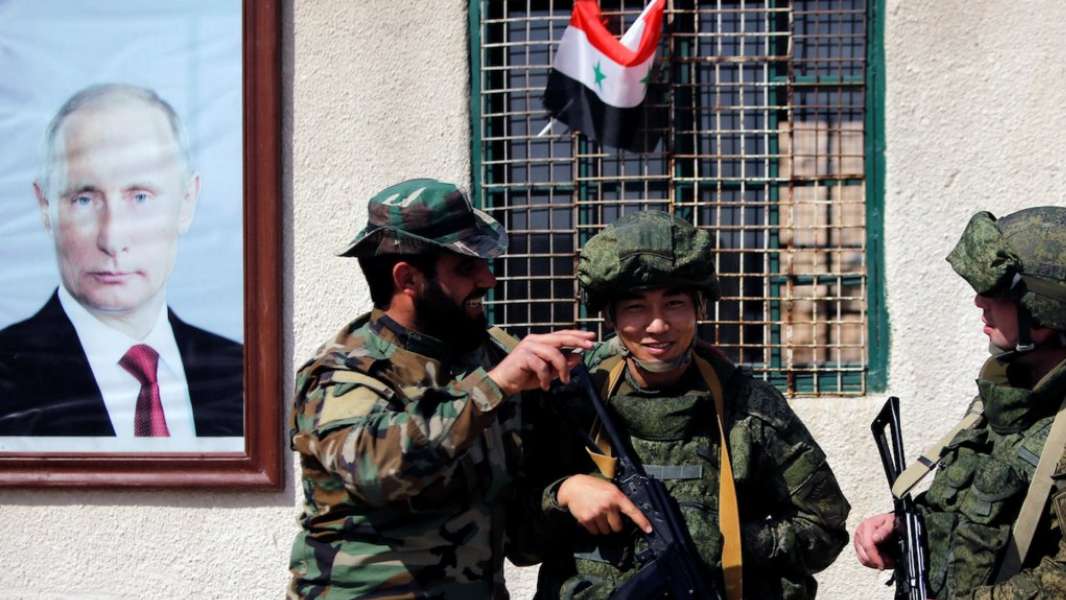 Russian soldiers at a checkpoint near Wafideen camp in Damascus, March 2, 2018. Omar Sanadiki/Reuters
Orient Net
Groups representing Russian military veterans plan to ask the International Criminal Court (ICC) to investigate Russia’s secret deployment of civilian contractors in Syria, Ukraine and Africa, a paramilitary leader said on Friday (Nov. 9), Reuters reported.
The recruitment of civilians to fight abroad is illegal in Russia, and the Kremlin has repeatedly denied reports of thousands of Russian private contractors fighting alongside the Assad regime in Syria. Over 100 Russian civilians were killed during the campaign, according to people familiar with the mission.
However, the ICC has no jurisdiction over Syria and has never handled any cases like this before.
More than a dozen Russian veteran organizations plan to write to Fatou Bensouda, prosecutor of the Hague-based ICC investigating war crimes, according to Yevgeny Shabayev, a paramilitary Cossack group leader who says he personally knows dozens of people who have been on such assignments.
It is unclear how big the organizations on the list are and they may not represent a significant majority of veterans - of whom there are hundreds of thousands in Russia following its intervention in Afghanistan and the conflict in Chechnya.
A letter of appeal from the groups will urge Bensouda to initiate a probe into recruitment of the Russian mercenaries.
“The Russians fight abroad as “volunteers” and without an official recognition from the Russian government,” said Shabayev, who has once served as a representative of one of self-proclaimed pro-Russian separatist republics in eastern Ukraine.
The veterans, some of whom are close to the mercenaries, say in the letter they are unhappy with the fact that private contractors operate illegally and enjoy no social benefits or protection afterwards.
“In fact Russian civilians are being sent out of their country of residence to be illegally used for military purposes.”
The Kremlin and the Russian Defence Ministry did not reply immediately reply to requests for comments. A spokeswoman for Bensouda’s office said by email she was unable to comment.
Several hundreds delegates plan to discuss the document at a forum on Nov. 18 in Moscow and mail it to the ICC the next day, Shabayev said adding that they have worked on the document for several months.