IRGC recruits desperate Afghans to fight and die in Syria 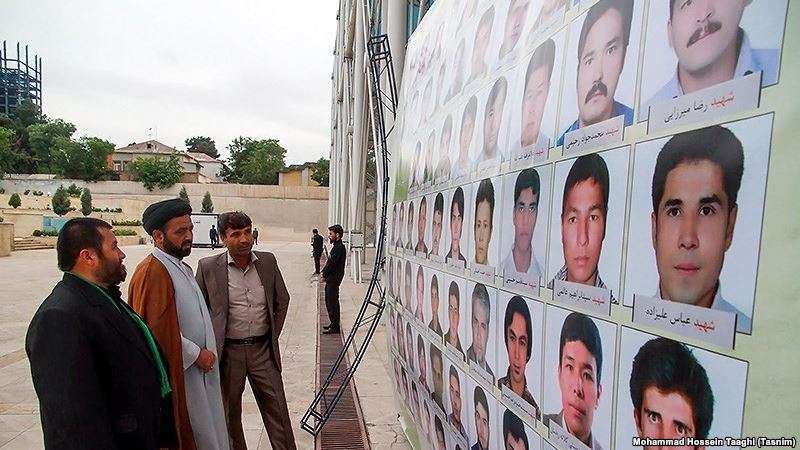 Iran -- A funeral for Afghan militiamen who were organized by Iran to fights in Syria and have been killed inside Syria, on May 05, 2015.
Orient Net
The Iranian regime continues stands accused of sending members of its Afghan minority to Syria as part of the regime’s military operations. As a result, the United States has announced a wave of new sanctions targeting businesses which provide financial support to these paramilitary structures.
The Basij Resistance Force has been accused of recruiting child militiamen for the war in Syria.
Up to 2 million undocumented Afghans are said to live in Iran, in addition to another 1 million Afghans with refugee status, although this is currently subject to change as some Afghans leave Iran due to the prevailing economic crisis.
Mostly coming from undocumented families, these young soldiers are often recruited under the threat of deportation to Afghanistan. Others join voluntarily due to the promise of gaining residence status in Iran. However, there is little doubt that the problematic legal status of the recruits is an important motivation in their decision. Similarly, owing to the economic hardship in Iran, many join the Basij with the promise of a stable wage of 800 dollars a month.
It is believed that up to four thousand Afghans are assigned to the Liwa Fatemiyoun, an Afghan Shia brigade, which is part of the Islamic Revolutionary Guard Corps militias in Syria.
According to one of the members of the Liwa Fatemiyoun known as Hamid Ali, who was interviewed by the Human Rights Watch, the Quds militia makes the decisions about the deployment of Afghan soldiers. One deployment on the Iraqi border involved a unit of 400 Afghan militiamen, which was given little support. “They did not give us heavy artillery or anything other than our AK-47s.” 200 soldiers were killed within days from their deployment.
In fact Iranian regime’s involvement in Syria is much more than defending a few holy places. Iran entered the war to save Bashar al-Assad’s regime in an all-out effort.
Based on RFE