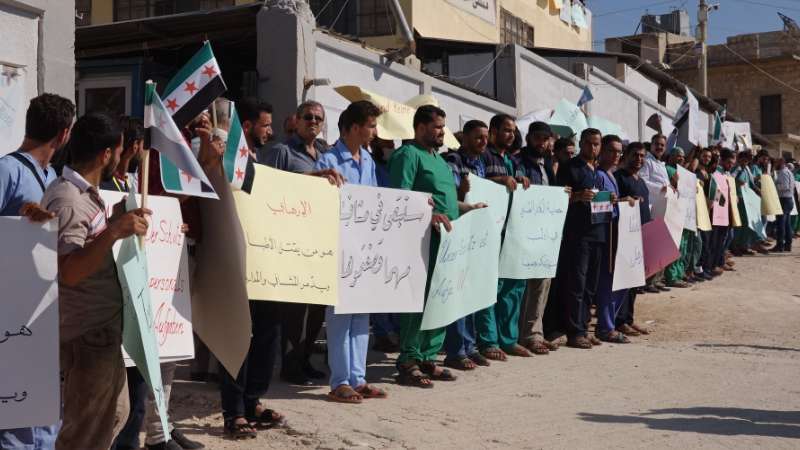 Orient Net
Health workers in Syria’s Idlib protested the assault and attacks by Assad regime and its supporters on hospitals and health centers on Sunday (Sep. 16)
Hundreds of doctors, nurses and ambulance drivers gathered in front of Atma Hospital in Idlib city center near the Syrian - Turkish border, Orient correspondent said.
Chanting slogans, the protestors were holding banners that read “Health workers are not alone”, “Terrorist kills doctors, targets hospitals.”
“We are not terrorists, we are doctors and health workers,” Dr. Muna Hattab told Anadolu Agency.
Muhib Kaddur, manager at Atma Hospital, said: “Doctors are symbols of the revolution. We are part of the international health sector. Our protection is the duty of the international community. We stayed here to help people.”
Ibrahim Tilas, another doctor, called for an end to the airstrikes by the Assad regime.
Located near the Turkish border, Idlib province is home to more than 3 million Syrians, many of whom fled from other cities following attacks by Assad militias.
The Syrian regime has recently announced plans to launch a major military offensive to the area, long controlled by armed opposition.
The UN warned that such an offensive would lead to the "worst humanitarian catastrophe in the 21st century".