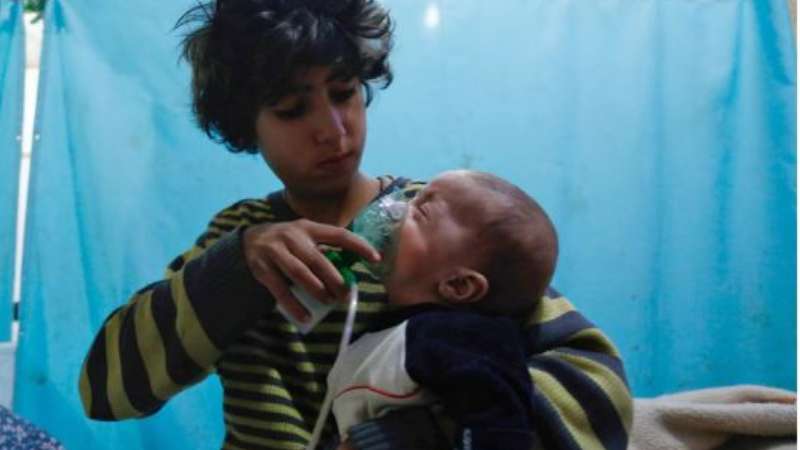 A Syrian boy holds an oxygen mask following a gas attack on Douma in Damascus countryside, on January 22, 2018. CREDIT: HASAN MOHAMED/AFP
The most senior British officer in the fight against ISIS has denounced Russian claims that Britain and the US are about to stage a chemical attack in Syria, Telegraph reported.
Major General Felix Gedney, the Deputy Commander of the international military force to defeat ISIS, dismissed as "absolutely ridiculous propaganda" suggestions Britain and the US are about to launch chlorine-loaded missiles.
"The UK is a proud coalition member with a proven track record [to defeat ISIS]," Maj Gen Gedney said in a tweet.
"All coalition members condemn the use of chemical weapons," he added.
__new_in_first_article1__
Earlier Major General Igor Konashenkov, the Russian defence ministry’s spokesman, said that American cruise missile ships working in conjunction with "British secret services" will target the settlement of Kafr Zayta, to the south of Idlib, "as a pretext for missile strikes by the West and the United States".
The Russian general claimed that "English-speaking" foreign experts had arrived in the Hbit, to stage a "major provocation" using chemical weapons early this week using chlorine-loaded missiles. "The strike on Kafr Zeita from rocket launchers using poisonous substances is planned in the next two days," he said on Saturday.
Citing reports that terrorist groups had prepared eight containers of chlorine, Gen Konashenkov suggested the presence of a US Navy destroyer in the Gulf and a US air force bomber in Qatar showed an attack was imminent.