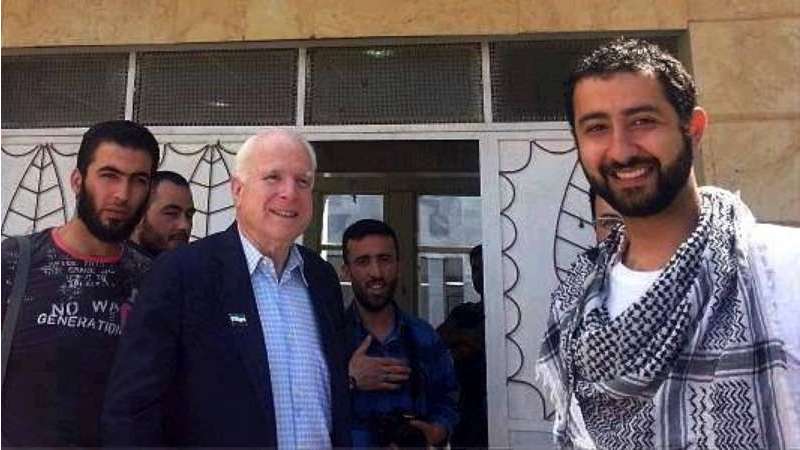 Orient Net
US Senator John McCain, who ran unsuccessfully for president as a self-styled maverick Republican in 2008 and became a prominent critic of President Donald Trump, died on Saturday, his office said. He was 81.
McCain, a US senator from Arizona for over three decades, had been battling glioblastoma, an aggressive brain cancer, discovered by his doctors in July 2017, and had not been at the US Capitol in 2018. He also had surgery for an intestinal infection in April of this year.
His family had announced on Friday that McCain was discontinuing further cancer treatment.
A statement from his office on Saturday said: “Senator John Sidney McCain III died at 4:28 p.m. on August 25, 2018. With the senator when he passed were his wife Cindy and their family. At his death, he had served the United States of America faithfully for sixty years,” Reuters reported.
McCain criticized Trump’s Syria policy despite cancer diagnosis.

.@POTUS's pledge to withdraw from #Syria has only emboldened Assad, backed by Russia & Iran, to commit more war crimes in #Douma. @POTUS responded after last year's chemical attack. He should do so again & make Assad pay a price for his brutality. https://t.co/u30kF0ww8g

In Congress, McCain built a generally conservative record, opposing abortion and advocating higher defense spending. He criticized Obama for not doing more to intervene in Syria’s war.
McCain was the highest-ranking US official to visit opposition controlled areas in Syria since Robert Ford, the US ambassador to Syria, crossed the border into northern Syria to meet with Syrian opposition leaders in 2013.
“My deepest sympathies and respect go out to the family of Senator John McCain. Our hearts and prayers are with you!,” US President Donald Trump tweeted.
Syrian activists in USA mourned senator McCain who supported the Syrian revolution against Assad regime.
"Back in 2012, when we first started advocating for Syria on the Hill, I remember that members of Congress always sent their junior staff to meet with us (if they even agreed to meet). The exception was Senator McCain, who took the time, himself, to meet with our young and new team, and listen to us as we advocated for a Free Syria," Syrian activist Yisser Bittar Saad Aldeen said.
“I swear to you, his eyes teared as he spoke of the women who were raped by Assad militias and the massacres that we thought almost no one knew about,” Yisser added.

Syrians will always remember #McCain with love and respect. He stood up with them against genocidal #Assad when other politicians chose to turn away. Rest In Peace @SenJohnMcCain