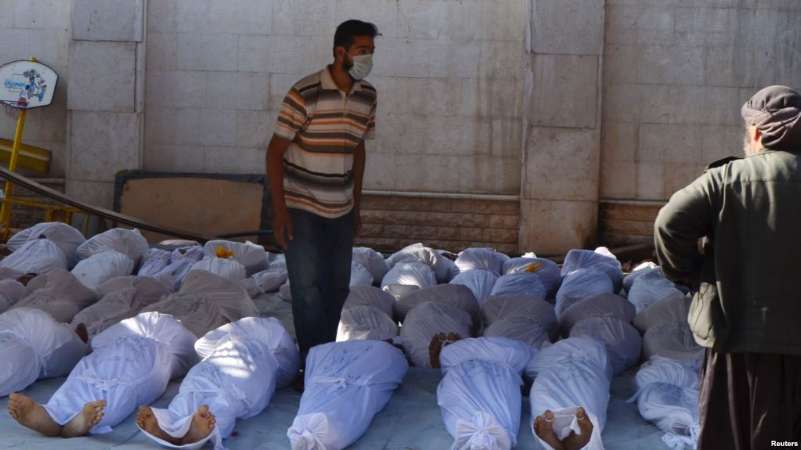 Syrians mark fifth anniversary of Assad chemical massacre in Ghouta
Syrians are marking the fifth anniversary of the chemical massacre committed by the Assad militias in Damascus’ Ghouta on the 21st of August  2013.
Opposition groups confirmed hundreds were gassed to death when Assad militias fired rockets with chemical warheads into Damascus suburbs and Ghouta.
The poisonous attacks mainly hit the eastern Ghouta’s towns of Zamalka, Arbeen and Ein Tarma.

Syrian opposition groups confirmed the regime killed more than 1500 people on the 21st of August 2013.
The US president Barack Obama said after ten days of the massacre that the world watched in horror as men, women and children were massacred in Syria in the worst chemical weapons attack of the 21st century.
__new_in_first_article1__
Obama added the United States presented a powerful case that the Syrian regime was responsible for this attack on its own people.
The US intelligence showed the Assad regime and its militias were preparing to use chemical weapons, launching rockets in the highly populated suburbs of Damascus, and acknowledging that a chemical weapons attack took place.
Hospitals were overflowing with victims; terrible images of the dead. All told, well over 1,500 people were murdered.
Several hundred of them were children -- young girls and boys gassed to death by the Assad regime.
Observers said the attack was an assault on human dignity. It also presented a serious danger to the world security.
Syrians say Assad terrorists used chemical gases against civilians and opposition fighters in many other Syrian cities since 2013, including Idlib’s Khan Sheikhoun and eastern Aleppo while the perpetrators are still at large.
قيم هذا المقال