Banned 21 years ago, yet still the world stands by as chemical attacks go unchecked 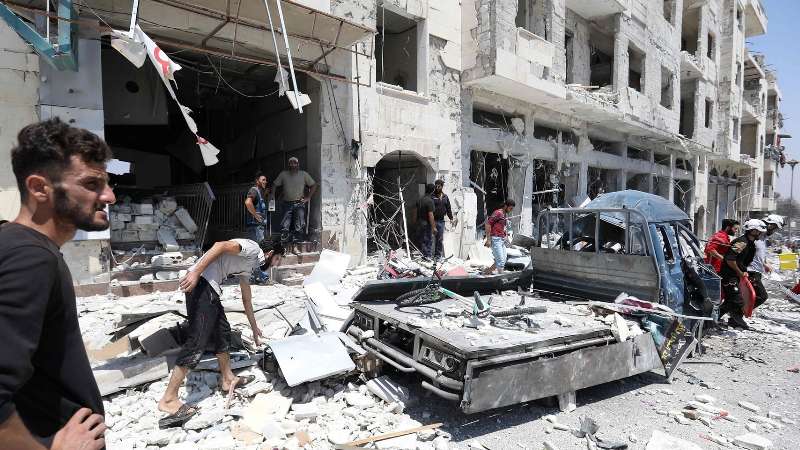 The aftermath of a car bomb in Idlib this month: Syria and its allies are poised to storm the opposition stronghold. Photograph: Omar Haj Kadour/AFP/Getty Images
Sweeping US sanctions imposed on Russia last week as punishment for the Salisbury nerve agent attack help maintain the comforting impression of an international community united in its determination to prevent the use of chemical weapons. Airstrikes by US, British and French forces on Assad regime targets, following April’s chlorine gas atrocity in Douma, were intended to provide similar reassurance.
But far from being stamped out, the use of such weapons is in danger of being normalised 21 years after most of the world signed the Chemical Weapons Convention, which banned their development, production, stockpiling and use. Experts suggest the threat comes not only from outlaw regimes like Syria’s but increasingly from “non-state actors”, such as ISIS.
The Kremlin has vehemently denied involvement in March’s attack on Sergei Skripal and his daughter Yulia. But history and facts point to a different conclusion. Studied ambiguity mixed with lies and deception has, over the years, characterised all governments’ public stance on chemical weapons.
After the first world war, the major nations signed the 1925 Geneva Protocol, pledging never again to use poison gas in warfare. It was widely disregarded from the start. The Soviet Union and Nazi Germany both pursued the development of poison gas and nerve agents prior to 1939. Fascist Italy used mustard gas in Ethiopia and Libya. Imperial Japan behaved similarly in China. Other countries privately reserved the right to use the banned weapons as a “last resort”. Britain planned to spray mustard gas on the beaches in 1940 if Hitler invaded.
Development and secret testing continued after 1945, with the US and UK focusing on new nerve agents such as sarin, ricin and VX – with sometimes-lethal experiments on humans. The Soviet Union was accused of using chemical weapons in Afghanistan after its 1979 invasion. In recent decades, their use was reported in Vietnam, Rhodesia, Angola, in the Iran-Iraq war, in Saddam Hussein’s 1988 attack on Kurds in Halabja, and in the first Gulf war in 1991.
The 1997 Chemical Weapons Convention was a big step forward but, given this history, it can safely be assumed Russia is far from alone in circumventing it. Though Russia and the US claim to have destroyed their chemical stocks, they still maintain capability to produce new ones – and there is speculation about new super-chemicals much more toxic than sarin and VX.
__new_in_first_article1__
In Syria, dozens of chemical attacks have been recorded by the Organisation for the Prohibition of Chemical Weapons (OPCW). In January, Rex Tillerson, then US secretary of state, said Vladimir Putin’s government “ultimately bears responsibility for the victims” of chemical weapons in Syria since it became militarily involved in 2015.
Tillerson accused Moscow of violating a 2013 US-Russia agreement to destroy Syria’s stockpiles, and breaching the 1997 treaty. The recent sanctions reflect this broader, ongoing concern, and come as Russian, Syrian and Iranian militias are poised to storm north-western Idlib province, the last opposition holdout and a haven for millions of refugees.
If the opposition factions resist, Assad could well resort to chemical attacks, as in Aleppo, Douma and Eastern Ghouta. What then will the US and allies do? Donald Trump could order more airstrikes. But their impact is limited, both militarily and as a deterrent. Attempts at diplomatic action against Assad at the UN would certainly be blocked by Russia, as in the past.
According to chemical weapons expert Hamish de Bretton-Gordon, the effectiveness of chemical weapons in Syria may encourage their use elsewhere. The failure of world leaders to stop such attacks had, he warned earlier this year, increased “the possibility of every despot, dictator, rogue state or terrorist using them with impunity in future”. An urgent review of the OPCW’s charter was needed to “prevent further atrocities and proliferation”.
A subsequent British proposal to strengthen the OPCW, agreed in June over Russian objections, was seen as an important step, but worries that terrorist groups, not bound by treaties, will increasingly attempt to gain and use chemical capabilities remain. ISIS is said to have used such weapons against Iraqi, Syrian and Kurdish militias.
Deterrence and prevention are important. So is punishing those responsible. In a report earlier this year, the Human Rights Watch declared that international efforts to bring perpetrators to justice were failing, too. “The [Syrian government] is using chemical weapons that are banned the world over without paying any price,” it said. “The UN security council and OPCW are silently looking on as Syria transforms the nightmare of chemical warfare into reality.”