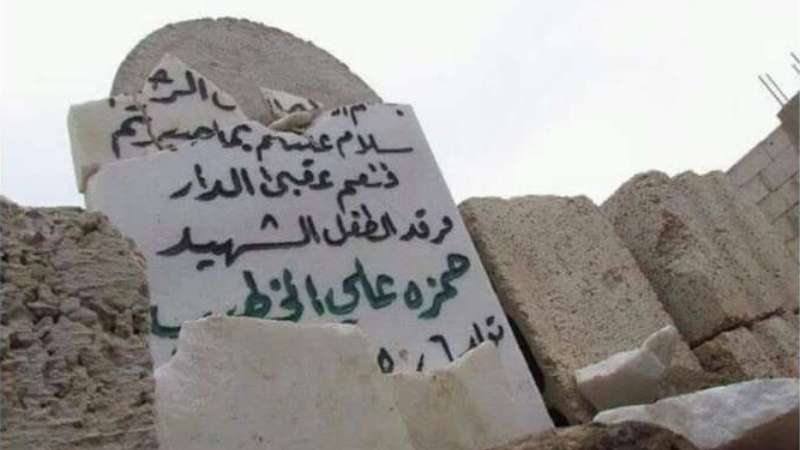 Orient Net
Activists on social media have posted photos showing the tombstone of the child Hamza al-Khatib being destroyed after Assad militias controlled Al-Jiza town in Daraa eastern countryside.
Pro Assad social media called Assad sectarian militias to retaliate against Hamza al-Khatib (who died under torture of the regime) because he was one of the reasons for the Syrian revolution.
Hamza was picked up by Assad terrorists on 29 April 2011. On 25 May 2011, his badly mutilated corpse was released to his horrified family, who were warned to keep silent.
Hamza was tortured by the Assad militias; his swollen body showed bullet wounds on his arms, black eyes, cuts, marks consistent with electric shock devices, bruises and whip marks. His neck had been broken and his penis cut off.
When Syrians saw the graphic footage, they filled their Facebook pages with the sentence: "We are all Hamza al-Khatib".
Hamza has become a poster boy for the Syrian revolution. His story broke by broadcasting in YouTube before it went global on Orient News, and most Arab and international TV channels.
Daraa is the cradle of the Syrian revolution which broke out against the Assad regime on March 15, 2011.