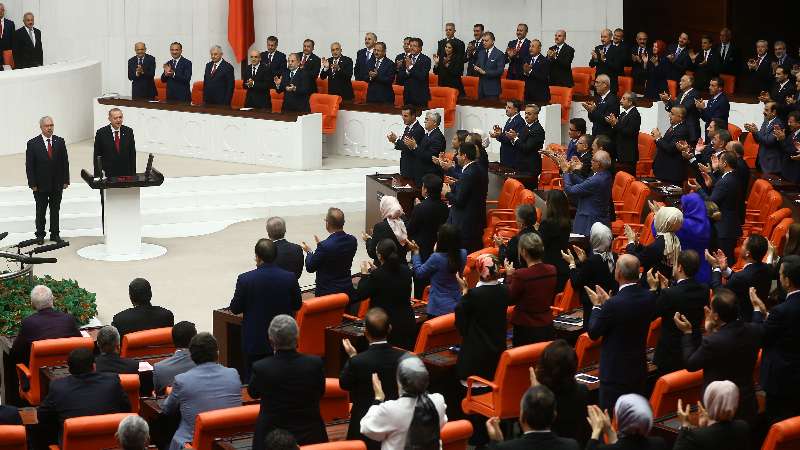 AA
Orient Net
Recep Tayyip Erdogan took the oath of office under Turkey’s new presidential system at 4.30pm local time on Monday (July 9). Erdogan, the AK Party and MHP candidate, won the June 24 presidential election with 52.5 percent of the vote.
President Recep Tayyip Erdogan on Monday took the oath of office as Turkey’s first executive president. He is expected to announce his cabinet later in the day, TRT said.
Presidential aide Ibrahim Kalin said Erdogan would visit the mausoleum of Turkey’s founder, Mustafa Kemal Ataturk, following the swearing-in ceremony.
He said the presidential inauguration ceremony would be held on Monday at 6.00pm local time (1500 GMT) at the presidential complex in the capital Ankara.
Twenty-two heads of state and 28 prime ministers and speakers of parliament and scheduled to attend the ceremony.
Together with the officers and guests of the ceremony, some 10,000 people are expected to take part. Turkish citizens from all walks of life, including teachers, firefighters, village heads, tradesmen, miners and dentists have been invited. Leaders of religious communities will also attend the event.
Following his visit to Ataturk’s mausoleum, the president will enter the presidential complex with a cavalry escort accompanies by an Ottoman-style military band. His entry to the presidential complex will be greeted with a 101-gun salute.
Guests will be given ceremonial 1 Turkish lira coins minted for the occasion. Some of these coins will also be placed on the market. A special stamp will be printed to commemorate Erdogan’s inauguration.
Political and religious representatives from the Balkans, the Caucasus and Central Asia will also attend the ceremony.
The president will also host a dinner in honour of attending heads of states, and selected guests.