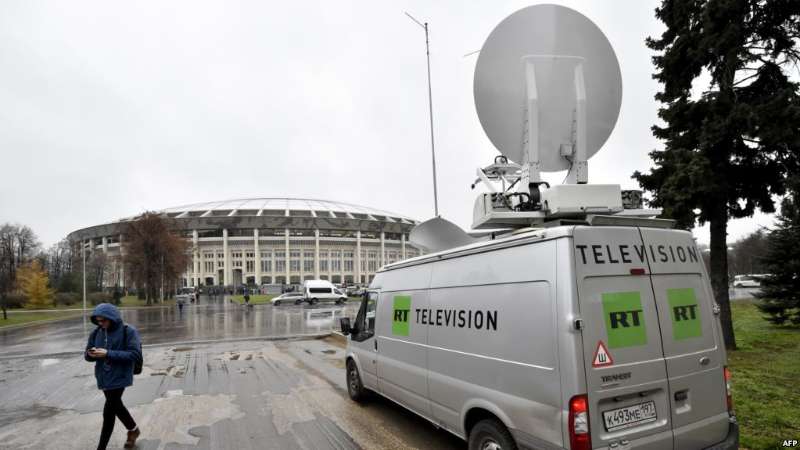 Orient Net
“France’s media regulator has issued a warning to RT France, the French outlet of Russia’s state-run broadcaster, for allegedly misrepresenting facts in a program about a chemical weapons attack in Syria,” Radio Free Europe said.
The Conseil Superieur de l’Audiovisuel (CSA) said in a statement late on June 28 that an April 13 RT program about an alleged attack in the Syrian region of eastern Ghouta, among other things, dubbed over the voices of Syrian civilians with words they had not said.
France’s warning highlights the dilemma facing Western governments in dealing with Russian state-run media which often trumpet a Kremlin view of world events that directly contradicts the view of Western world leaders.
Right after the April 7 attack in the Syrian town of Douma, medics and rescuers said 40 people had died from exposure to chlorine and sarin gas, and Western powers blamed the incident on Assad militias.
The attack provoked global outrage and within days triggered retaliatory missile strikes against alleged chemical weapons sites in Syria by the United States, Britain, and France.
But in a news feature headlined "Simulated Attacks," the French regulator said RT correspondents, like the Russian government and Assad regime, questioned whether the attack actually occurred and accused a local opposition factions of staging a fake attack on the population.
Russia and Assad right after the attack accused opposition and the White Helmets rescue group, which they claim sympathizes with Syria’s opposition, of simulating the attack.
__new_in_first_article1__
More recently, Moscow has suggested that rebels launched a real chemical attack in Douma, claiming that Russian and Syrian troops since taking control over Douma have found a rebel "chemical laboratory" with equipment manufactured in "Western Europe."
The world’s chemical weapons watchdog group, the Organization for the Prevention of Chemical Weapons, currently is investigating the Douma incident and is expected to report its findings soon.
The French regulator said RT’s program on the controversial and sensitive topic of chemical weapons use in Syria, which has divided Russia and the West for years, displayed "failures of honesty, rigor of information, and diversity of points of view."
"There was a marked imbalance in the analysis, which, on a topic as sensitive as this, did not lay out the different points of view," the regulator said.
The regulator did not impose sanctions on RT, but it has the authority to fine a broadcaster or suspend its license.
RT France in a statement acknowledged a mistake in the French translation of comments from a Syrian witness, but said this was a purely technical error which had been corrected.
"RT France covers all subjects, including the Syrian conflict, in a totally balanced manner, by giving all sides a chance to comment," said RT France president Xenia Fedorova.
French President Emmanuel Macron has been aggressive in seeking to curb alleged Russian media disinformation.
__new_in_first_article2__
The United States, by contrast, has required RT to register as a "foreign agent" with the U.S. government but -- reflecting the strong protections for press freedom in the U.S. Constitution -- has not sought to regulate aspects of its broadcasts.
Macron has described RT, formerly called Russia Today, as a tool for "influence-peddling." He accused the broadcaster of spreading "propaganda" during his 2016 presidential campaign and banned it from his campaign headquarters.
During a joint news conference with Russian President Vladimir Putin in Versailles last year, Macron said the broadcaster and Russian press agency Sputnik had on several occasions spread fake news and deceitful propaganda.
Before the launch of RT France late last year, CSA chief Olivier Schrameck said that the agency would be watching the channel constantly and would respond promptly to what he called "anomalies."
RT has also faced multiple warnings from Britain’s media regulator Ofcom over its reports on Syria as well as on the conflict between government forces and Russia-backed separatists in eastern Ukraine.
Draft French legislation might go even further to combat what the government considers "fake news," including giving the state new powers to take foreign broadcasters off the air if they attempt to "destabilize" the country.
The measure has been viewed as aimed at RT in particular.